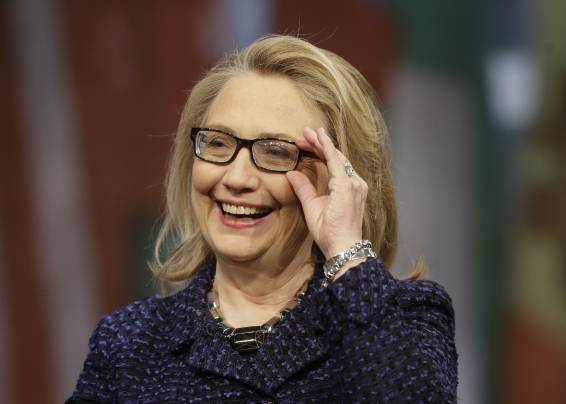 Former Secretary of State Hillary Clinton knows her presidential campaign is threatened before it begins by the mountain of wreckage left along her trail of tears tenure at State.

Her failed and embarrassing “reset” with Russia, her mismanagement of Egypt so that all parties now hate the U.S. and President-elect Abdel Fattah al-Sisi is accepting Vladimir Putin‘s embrace, the horrors ofSyria escalating, Iran poised to legitimate their nuclear ambitions and now even her favorite talking point — Myanmar — becoming a scene of ghastly apartheid tilting towards genocide, as detailed last week by the New York Times’ Nicholas Kristof.

Did I mention China‘s disdain for us, despite her much-vaunted freeing of a sole Chinese dissident to show for all her efforts to make nice with the People’s Republic?

All these fiascos to list before her we even turn our attention to the Libyan intervention she championed and the horror of Benghazi that followed, a horror brought about by her shoddy oversight of the repeated demands for more security by her hand-picked ambassador to Tripoli Christopher Stevens.

Hillary’s negligence of the management of the security of all U.S. facilities in Libya, but especially those in terrorist-infested Benghazi, will be a focus of the House of Representatives’ Select Commitee on Benghazi, led by Rep. Trey Gowdy, R-S.C., and thus inevitably to be known as the “Gowdy Committee.” So too will the Gowdy Commitee focus on the actions and non-actions of Hillary and President Obama on the night of the terrorist attack of Sept. 11, 2012. Almost no details have emerged on her performance that night when the proverbial “call at 3 a.m.” came, and many questions about that performance need to be answered.

Hillary leaked a 34-page excerpt from her forthcoming memoir, a chapter that purports to be her last word on the subject of Benghazi, an attempted pre-emptive strike on the committee and especially on journalists set to interview her about the book in the weeks ahead.

In the excerpt, she tries to deny there are unanswered questions and establish that those asking them are on a partisan witch hunt. She is pulling a classic Clinton maneuver — the artful mixing of outrage, petulance and straw men to wall off her record from close scrutiny, a ploy that recalls nothing so much as Bill Clinton‘s pre-presidential “I’ve made mistakes in my marriage” shield wall, and his post-Lewinsky “I’m going back to the work the American people gave me to do” curtain-falling cutoff.

Hillary, though, faces a Manhattan-Beltway media elite that may have turned on her in key places. The New York Times White House correspondent Michael Shear said on my radio program Friday (the audio and transcript are posted at my website) that “yes, there are unanswered questions” about Benghazi.

Hillary’s leaked chapter cited the New York Times’ reporting on Benghazi as one of the reasons why she could declare Benghazi a “case closed” and turn back questions on her book tour and beyond. But here is Shear correcting her. Not even the Times is tilted enough towards her to buy her lame “nothing left to ask or investigate” line of defense.

Hillary is going to try to defeat the invasion of her record by real journalists and the Gowdy Committee on the beaches. It worked in recent sit-downs with Thomas Friedman and Robin Roberts, who embarrassed themselves with softball after softball to her. Will it work with all the others,

Every real journalist that crosses her path between now and her decision to run and if she runs often thereafter, ought to remind Hillary of Hillary’s own declaration to Sen. Ron Johnson during a committee hearing called to investigate Benghazi, a statement made while under oath immediately following her infamous “What difference at this point does it make?” outburst.

Her very next line was, “It is our job to figure out what happened.”

It remains the job of journalists sitting across from her in the days and weeks and months ahead to respectfully, patiently, repeatedly press for the details of her actions that night, and to refuse all of her certain attempts to brush off or dodge the questions. She will say “asked and answered,” to which the real journalist will respond, “Madame Secretary, I know you take that position, but it there are many unanswered and very important answers. You can chose to refuse to answer them, but as you said to the Senate, and I quote, ‘Our job is to find out what happened,’ so I am going to ask these unanswered questions, and there a lot of them.” Specifically:

How often and when exactly did you speak with the president that night?

How often did you talk with Secretary of Defense Leon Panetta that night? Did you discuss sending military forces with him?

Neither you nor the president nor Panetta could have known once the attack was underway when it was going to end or if, once ended, it would be resumed, so why did you not insist the Pentagon start moving massive reinforcements there? What if it had turned into a days-long siege?

Did you ask any of our allies in the region, especially those with highly trained rapid reaction forces — specifically Israel — for help? If not, why not? Did the Israelis offer help that night? Did any of our allies offer military assistance?

You called your number-two official in the country, Greg Hicks, at 2 a.m. Libyan time. What did you discuss and for how long? Who else was on that call in your office? The ambassador was missing at the time you spoke with Mr. Hicks, but not known to be dead at that point, so after his death was confirmed, why did you not call Mr. Hicks back to at least give encouragement, if not direction? Didn’t he deserve to hear from you again when all was in chaos and his friend and ambassador murdered? How could you abandon him win out even a follow up five minute phone call?

The book HRC by Jonathan Allen and Amie Parnes says you went home at 1 a.m. Eastern time. Why? Did you crack under pressure in what Allen and Parsons describe as a chaotic scene at State?

Did you tell the families of the victims when the bodies were returned that the killers would be brought to justice? Why has that not happened?

Will you ask that the internal detailed timeline of that night compiled by State to be released?

Did your or any of the staff answering to you at State order the people who survived Benghazi not to discuss it with the media, and in fact send those people to far-flung new posts where access to them has remained impossible to obtain?

Did you fail that night?

What did your performance that night tell us about your ability to perform as commander in chief?

Those are the most important questions, but there are many many more.

Lots of questions indeed, if only they will be asked, if only Manhattan-Beltway journalists can summon the courage of their predecessors chasing Nixon or any other candidate for the Oval Office or sitting president with much to hide and obviously trying hard to hide it.