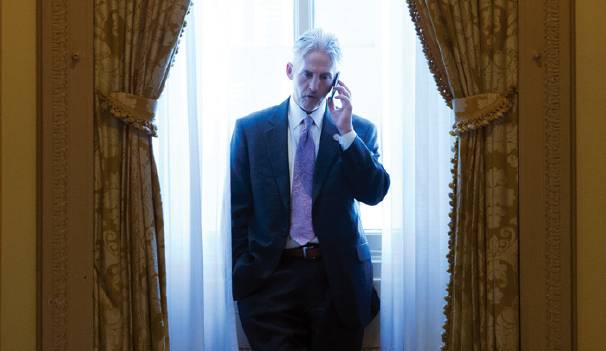 Rep. Trey Gowdy‘s rise from obscure South Carolina backbencher to chairman of the House‘s new special Benghazi committee took a quantum leap last October, when he stole the show at an otherwise mundane Republican news conference about the terrorist attacks.

While only in his second term, the conservative Gowdy rushed to the podium and — with the conviction of a preacher and the erudition of a prosecutor — launched into a passionate yet disciplined plea for “justice” that mesmerized those watching, including his GOP colleagues on the dais.

His three-minute address skillfully summarized Republican frustration over the Obama administration’s response to the attacks like no one had before, and was a seminal moment in the party’s push to raise public awareness about the scandal. And it instantly transformed Gowdy into a cult hero in conservative America (a clip of his remarks has generated 3.4 million views on YouTube).

Also impressed was House Speaker John Boehner, R-Ohio, who in May tabbed Gowdy to lead the new House select committee to investigate the Sept. 11, 2012, attacks in Benghazi, Libya, which claimed the lives of four American diplomats, including Ambassador Christopher Stevens.

Gowdy, with less than four years in the House, lacks seniority. But his appointment came as little surprise to those who know and work with the 49-year-old lawyer.

“He is cerebral, deeply studied and actually one of the most intelligent members I’ve served with. And I don’t say that lightly — this is not an empty compliment,” said Rep. Patrick McHenry, R-N.C.

“If he can’t get to the bottom of [Benghazi] then this will be lost to history, because he has a great capacity to work through an investigation and come to a fair conclusion.”

Gowdy’s direct, no-nonsense and at times confrontational approach to politics is the hallmark of the South Carolina native.

He challenged incumbent Rep. Bob Inglis in the 2010 Republican primary for South Carolina’s 4th Congressional District, which includes Greenville and Spartanburg. During the campaign Gowdy ignored President Ronald Reagan’s “11th Commandment” — thou shalt not speak ill of any fellow Republican — accusing Inglis, who had a 91 percent rating from the American Conservative Union, of not being conservative enough.

Gowdy’s decision to run frustrated some in the GOP Establishment but endeared him to the state’s burgeoning conservative Tea Party faction, which pushed the challenger to a 40-point runoff victory over Inglis.

Once in Congress, Gowdy continued his independent spirit, occasionally bucking the party leadership.

Only months into his first term in summer 2011, he opposed the Boehner-brokered debt limit bill, a measure that eventually passed and allowed the federal government to keep paying its bills by raising the nation’s borrowing limit.

The South Carolinian was accused of stubbornly holding to Tea Party principles at the risk of damaging the national and global economies. But Gowdy bristled at the notion, saying at the time that he and other backers of the movement are “not a bunch of knuckle-dragging, mouth-breathing Neanderthals.”

“We’re interested in answering what we perceive to be the mandate, which is to stop the spending and change the way Washington handles money,” he said.

The pragmatic Boehner apparently hasn’t held a grudge, calling Gowdy “as dogged, focused and serious-minded as they come.”

Boehner added that Gowdy’s background as a federal prosecutor fuels “his zeal for the truth” and makes him a good fit to head the latest in a series of Republican-led Benghazi probes.

After earning an undergraduate history degree from Baylor University and a law degree from the University of South Carolina, Gowdy briefly worked as a lawyer before becoming a federal prosecutor in 1994. He prosecuted a range of high-profile crimes, including narcotics traffickingrings, bank robberies, child pornography cases and murder — never losing a case.

In 2000 he ran for South Carolina’a 7th Circuit Solicitor, the equivalent of a district attorney. He defeated the incumbent in the GOP primary and was re-elected twice. During his eight-year tenure he was interviewed on TV shows such as “Forensic Files” and “Dateline NBC,” giving him vital experience in dealing with the national media.

His time as a prosecutor was so important that the three dogs he and his wife Terri own are named Judge, Jury and Bailiff. They also have a son in college and a daughter in high school.

“If you ask him [Gowdy will say] the best job he’s ever had was to be a local prosecutor,” McHenry said. “So he’s got a different approach.”

Not everyone is convinced a prosecutorial approach to the special committee is a good idea.

Rep. Elijah Cummings of Maryland, the senior Democrat on the House Oversight and Government Reform Committee, repeatedly has accused Chairman Darrell Issa, R-Calif., of treating the panel’s Benghazi investigation as a kangaroo court — not an impartial, neutral effort. And with Gowdy serving as a chief Issa acolyte on the panel, Cummings says he is concerned the select committee will evolve in similar fashion.

“I do consider [Gowdy] a great prosecutor, I’ve seen him in a prosecutorial mode in our committee … but as far as this committee is concerned, I think we have to go in and be finders of the fact,” said Cummings, one of five Democrats appointed to the 12-member special panel.

“I don’t think we need to be making accusations before we even get in the room to hear the facts.”