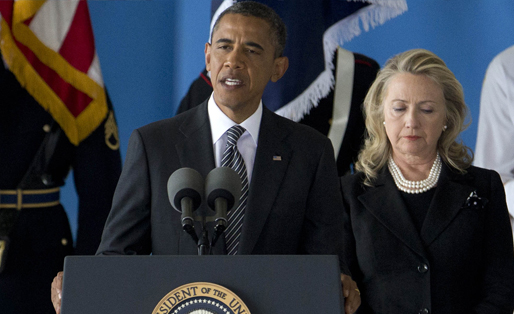 2008-2010: Tripoli Embassy DCM Christopher Stevens & USG pressured Qaddafi to release jihadis from prison, who then organized to launch revolution against him

11 Sep 2012 (ca 2100): Amb. Stevens & Sean Smith retired for evening; one DSS officer manned the TOC, w/others elsewhere on compound, but w/o their gear or weapons per DOS orders those be kept in separate bldg.

11 Sep 2012 (shortly after attack began): DSS guard Scott Strickland w/Amb. Stevens, Sean Smith inside safe room, escaped through barred window, but car kept per SOP beneath window for E & E was not there; Stevens & Smith did not follow out window

11 Sep 2012 (1915 EST/0115 BT): U.S. DOD Chief of Staff Jeremy Bash sent email to DOS leadership, immediately offering “forces that could move to Benghazi” – “we have identified the forces that could move to Benghazi. They are spinning up as we speak.” F-16 jets at Aviano AFB, 130-man USMC team at Sigonella AFB, 10th Group SF in Croatia all available, ready to go, never given “Go” order, possibly told to Stand Down, an order that could only come from Commander-In-Chief.

12 Sep 2012 (0100 BT): Amb. Stevens’ body found at SMC by Libyan casuals/looters, taken to Benghazi Medical Center where doctor tried to revive him, to no avail

12 Sep 2012 (ca. 0530 BT): Libyan rescue team arrived, attack ended, survivors plus bodies of Stevens & Smith departed Benghazi on a Libyan C-130 plus the leased C-130 from Tripoli; no official US forces ever sent, no official USG help ever arrived at Benghazi entire night

That very day, the official White House/State Department/CIA cover-up began & continues to this day. Multiple Congressional investigations, the State Department’s Accountability Review Board (ARB), and Rep. Trey Gowdy’s Select Committee on Benghazi all have failed to explain why the U.S. supported Libyan al-Qa’eda & Muslim Brotherhood to overthrow Qaddafi at a time when he was an ally against AQ in N Africa, why the U.S. facilitated gun-running to al-Qa’eda in both Libya (2011) and Syria (2012), why the Special Mission Compound in Benghazi was stripped of desperately-needed security, why the Obama administration failed to pre-position forces even in the face of multiple warnings, and why the Obama White House to this day leads an official cover-up about the true cause of the attacks against the U.S. mission in Benghazi as well as its failure to even attempt a rescue of beleaguered mission personnel there that resulted in the deaths of four Americans, the loss of the mission, and the descent of Libya into an utterly chaotic failed state that now threatens the entire region and even Europe.

o    Examination of Blumenthal’s emails, as leaked by hacker Guccifer, shows that reports sent by Blumenthal were gathered by Drumheller.

“If the Western world fails to understand the sensitivity of the Muslim world, then we are in trouble…Such provocations pose “a threat to international peace and security and the sanctity of life.”

“You have to see that there is a provocation. You should understand the psychology of people who revere their prophet and don’t want people to insult him.”