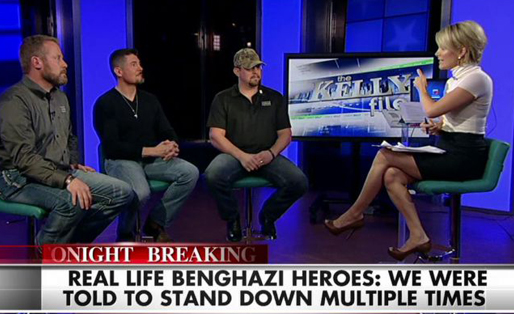 As seen on THE KELLY FILE | JAN. 04, 2016 | Ahead of the release of the film “13 Hours: The Secret Soldiers of Benghazi,” Megyn Kelly spoke to three of the heroes who fought on the night of the terror attack in Benghazi, Libya, that left four Americans dead.

Paronto said that the movie left him drained, because it brought him right back to the besieged American diplomatic compound and nearby CIA annex.

“It was a part of me that I relived on the screen, and I realized how much I’d been missing,” Paronto said. “It’s amazing being with your brothers and fighting … being there and being with them and having the faith that you’re going to defeat all the obstacles.”

Tiegen told Megyn that he was surprised during the attack that they were given a “stand-down” order and offered no help, even after Amb. Chris Stevens had been missing for hours.

Megyn noted that Hillary Clinton and the White House have relied on Congressional investigations that concluded there was no “stand-down” order given at the annex.

Paronto said it’s “just silly” and Tiegen pointed out that investigators believed everything else the men testified about.

“It’s kind of funny. Everything we testified to, they agreed with us 100 percent. Pretty much from us eating a candy bar to shooting all our ammo, but for some reason they don’t want to believe that we were told to stand down,” said Tiegen.

Geist said that despite the lack of help from the U.S. military, he was confident that their team, which had nearly 100 combined years of experience in counter-insurgency operations, would overcome the odds.

Paronto concluded that the film is important because it helps honor the sacrifice and service of those who lost their lives at Benghazi and those who selflessly risked their lives to save others.