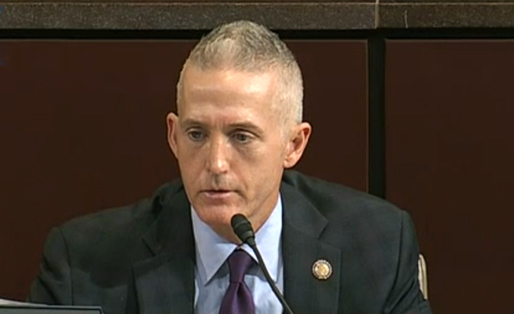 Most prosecutors would be all over emergent evidence that culpable actors had obstructed justice. Yet the House Select Committee investigating the Benghazi Massacre under the direction of South Carolina Republican and former prosecutor Trey Gowdy is not exactly tripping over itself to probe such evidence – at least not publicly.

Earlier this week, a retired high-ranking State Department official publicly revealed that former Secretary Hillary Clinton’s top aides hid damaging documents from her hand-picked investigative panel. Subsequently, that panel, the vaunted “Accountability Review Board” (ARB), did not even bother to interview Mrs. Clinton despite her pivotal roles in (a) the appalling security lapses prior to the terrorist attack that killed Ambassador Christopher Stevens and three other Americans; (b) the administration’s response on the night of the attack; and (c) Obama officials’ fraudulent claim that the attack was caused by spontaneous reaction to an anti-Muslim video, rather than by entirely predictable jihadist terrorism.

Yet, as Chairman Gowdy’s select committee finally convenes its first hearing later today – four long months after being established, ostensibly to press urgently for truth and accountability regarding an act of war by al Qaeda affiliated terrorists on the second anniversary of the 9/11 attacks – obstruction of justice is not the focus. Nor are allegations leveled just two weeks ago by members of the Annex Security Team in Benghazi. In a new book, 13 Hours: The Inside Account of What Really Happened in Benghazi (profiled in a Fox News special and in this review by the American Spectator’s Ross Kaminski), three team members recount the official reluctance and indecision that delayed their response to the attack – a delay they believe cost the lives of Ambassador Stevens and Mr. Smith.

This morning’s hearing is likely to be the last word the public will hear from the select committee for many weeks, if not months, as Congress glides towards its midterm election recess. Gowdy is nonetheless giving Democrats – who initially threatened to boycott the committee – an opportunity to use it as a showcase for the Obama administration’s implementation the ARB recommendations.

The Chairman’s decision was popular at the hard Left Mother Jones, which pronounced this hearing “Actually Worth Having.” It is nonetheless a disappointment for those of us hoping the select committee would focus on real accountability: Why did our government change sides in Libya for the benefit of anti-American jihadists? What exactly was our government doing in Benghazi – what mission was worth assigning U.S. personnel to one of the most dangerous places in the world for Americans? Who is ultimately responsible for the appalling lack of security at the American compound? Where was President Obama, and what exactly was he doing, during the hours Americans were under siege? Why did the commander-in-chief and the military-chain-of-command take no meaningful action taken to respond to the attack? What role did election-eve politics – Obama’s repeated claims to have “decimated” al Qaeda – play in the administration’s misleading decision to portray the video, rather than al Qaeda-tied terrorists, as the culprit?

Instead, the select committee is using its the much-anticipated first hearing to explore the recommendations of a flawed State Department investigation – a probe directed by a Secretary of State who should have been a central subject of the investigation and who, it is now alleged, made a concerted effort to control what documents the investigators were permitted to review. (At this stage, we of course do not know how successful this effort was – what documents were sifted out and whether the ARB ultimately got to see them anyway.)

The Democrats’ strategy to divert the spotlight from Mrs. Clinton and President Obama is patent. I’d put it this way:

Look everyone, this tragedy has already been investigated by highly respected Washington eminences – Ambassador Thomas Pickering and Admiral Michael Mullen. They found irregularities and proposed curative measures that the administration is duly adopting. Even Mitt Romney, in the campaign stretch-run when it would have helped him politically if there were really anything to Benghazi, decided there was no there there. This is a crusade by extreme right-wingers bent on derailing Hillary’s 2016 campaign. Time to move on.

Obviously, they are seeking to undermine an investigation whose authorization they opposed. The real question, then, is: What is the upside for Gowdy and Republicans in enabling Democrats to put their stamp on the committee’s work before the select committee, as far as public hearings are concerned, goes into more hibernation?

Earlier this week, the Daily Signal’s Sharyl Attkisson reported that former Deputy Secretary of State Raymond Maxwell observed an extraordinary weekend document-sifting session in a Foggy Bottom basement. At the personal direction of then-Secretary Clinton’s top lieutenants, he says, State Department officials removed from stacks of relevant documents “anything that might put anybody in the [Near Eastern Affairs] front office or the seventh floor [where Mrs. Clinton and her principal staff resided] in a bad light.”

Mr. Maxwell had shown up unannounced. He found that the document sifting was orchestrated by to “high-ranking” officials – who, Ms. Attkisson reports, have been identified as longtime Clinton henchman Cheryl Mills (then Secretary Clinton’s chief-of-staff), and deputy chief-of-staff Jake Sullivan (a veteran of Clinton and Obama political campaigns). The sifting was carried out under the direct supervision of an “office director” who is said to have been close to Clinton staffers, though she technically worked for Mr. Maxwell. He was not invited to participate in the session, did not assign the office director to be there, and was obviously not a welcome presence.

Why is this not the subject of Chairman Gowdy’s first hearing? While the public is just learning about Maxwell’s allegations, members of Congress have known about them for months. Gowdy has said his “very serious” allegations are “a perfect example of why this committee exists.”

Well, yes … and a far better example than the ARB recommendations.

Perhaps the chairman believes that accommodating Democrats will secure their buy-in to the select committee’s work, bolstering its legitimacy despite attacks from the Left. Perhaps he hopes this will establish an air of nonpartisanship that will raise the committee’s stature in the eyes of the legacy media. If so, that seems unlikely. Democrats’ buy-in to a session that suits their purposes does not assure their cooperation in the committee’s broader mission, and Republican quests to win the media over are an oft-trod dead end.

And then there is the Hillary 2016 factor. Democrats are demogoguing the select committee as a Republican ploy to undermine her likely presidential run. Republicans seem anxious to dispel that notion. Why? Nothing will stop Mrs. Clinton’s fans from saying such things. Logically, her ambitions are, if anything, more of a reason to scrutinize her stewardship of the State Department – the security lapses despite continuing jihadist attacks on Western targets, her key role in the “blame the video” fraud. The select committee’s investigation, after all, is about political accountability. It would be absurd to immunize her because she aspires to even higher political office.

Furthermore, Democrats are not alone at the center of the Benghazi storm. Republicans were up to their necks in the policy shift that ousted Qaddafi to the great benefit of America’s jihadist enemies. It is highly likely that top congressional Republicans (particularly in leadership and on the intelligence committees) were at least aware, if not approving, of whatever the government was up to in Benghazi (including, some allege, an effort to collect arms for shipment to “rebels” in Syria).

Intriguing questions have also been raised by Judicial Watch’s Micah Morrison about the activities of Aegis Defense Services, a military contractor active in Libya that has close ties to the U.S. intelligence community. One of Aegis’s top U.S. executives was Kristi Rogers, the wife of Congressman Mike Rogers (R., Mich.), chairman of the House Intelligence Committee. Rogers’ committee was responsible for investigating the Benghazi Massacre, including the CIA’s still unexplained mission there. As Eli Lake has reported, Rogers gave a pass to CIA officials accused by others of stonewalling his committee, and he vigorously opposed the appointment of a select committee. Recently, Rep. Rogers abruptly announced he would not seek reelection to his safe congressional seat and coveted chairmanship; Mrs. Rogers resigned first from Aegis and then, quite suddenly, from a law firm she’d joined only 13 months earlier – a law firm that had touted the “top secret facility security clearance” Mrs. Rogers had obtained for Aegis, and her creation of a board of directors that included two former senior CIA officials.

There are plenty of people and areas deserving of select committee attention. If Chairman Gowdy goes about his business evenhandedly, Hillary apologists who attack the committee as a witch hunt will look like exactly that – Hillary apologists. The 2016 circus will start soon enough; it should have no effect on how the Benghazi investigation is conducted now.

We must watch the committee with an open mind. Chairman Gowdy is an impressive fellow and clearly a fine lawyer. The committee has done very little publicly, but we have been told it is working hard behind the scenes, studying documents and deposing witnesses. Today’s hearing is the beginning, not the end. But many of us were hoping for a more enlightening public session before the committee goes dark again.