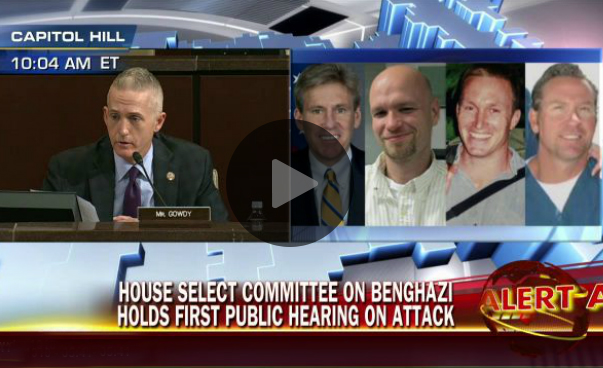 Sean Smith, Chris Stevens, Tyrone Woods and Glen Doherty represented us. They represented our country and our values. We sent them to do that. They were killed in an attack rooted in the animus some people hold toward us, simply because we are us.

To the family, friends, and loved ones of those killed, we can never adequately express our condolences and gratitude. As you have helped us understand, the four killed were more than just pictures on a TV screen. They were sons, husbands, fathers, brothers, and friends.  And they were our fellow Americans.

Some question the need for this committee. I respect your right to disagree, but the mark of a professional, indeed the mark of character, is to do a good job even if you do not think the task should have been assigned in the first place. Given the gravity of the issues at hand, I am willing to risk answering the same question twice rather than risk not answering it once.

I am willing to reconsider previously held beliefs in light of new, additional, complimentary or contradictory evidence. I am willing to approach anew witnesses previously interviewed in light of the real possibility that additional questions may be warranted. As we are keenly aware, all documents responsive to congressional requests have not been produced.

Moreover, there are witnesses with information or access to information with whom no committee of Congress has spoken. I am optimistic the vast and varied backgrounds of our colleagues can be put to great use on behalf of our fellow citizens. The House of Representatives constituted this committee to find all of the facts, and I intend to do so fully and in a manner worthy of the people we serve.

Our fellow citizens have legitimate and high expectations:

(2)         They expect us to move heaven and earth to help those representing us who are in harm’s way;

(4)         They expect we will not continue to make the same mistakes over and over again.

Which leads to this hearing.

Benghazi was not the first time our diplomatic facilities and people have been attacked. The barracks in Beirut, our facilities in Tanzania and Kenya are a few that come to mind amid too many others. And after those attacks, groups came together and made recommendations on how to prevent future attacks. That is the process seemingly followed.

An attack takes place, we commission a group to study how to make sure it doesn’t happen again, we pronounce it is time to move on and yet it happens again.  So to those who believe it is time to move on, that there is nothing left to discover, that all questions have been asked and answered, that we have learned the lessons to be learned— we have heard that before.   And yet the attacks and the tragedies keep coming.

So it is appropriate to review the recommendations of the most recent ARB and Rep. Adam Schiff is to be credited for suggesting we do so. It is also fair for us to ask why have we not done a better job implementing recommendations made decades ago.

Why does it take an attack on our people and facilities for us to make recommendations? Why not evaluate the threat before the attack? Why not anticipate rather than react?

The people we work for yearn to see the right thing done, for the right reasons, and in the right way.  They want to know that something can rise above the din of politics. They want to trust the institutions of government. So to fulfill the duties owed to those we serve and in honor of those who were killed perhaps we can be what those four brave men were: neither Republican nor Democrat. We can just be Americans in pursuit of the facts, the truth, and justice no matter where that journey takes us.