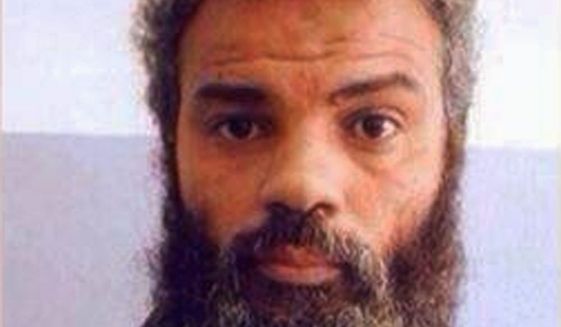 By Stephen Dinan – The Washington Times

Federal prosecutors won an 18-count indictment against accused Benghazi attacker Ahmed Abu Khatalla on Tuesday, which charges him with leading the assault that killed the U.S. ambassador to Libya and makes him eligible for the death penalty.

The indictment, handed up in federal district court in Washington, also puts the final nail in the administration’s initial claim that the 2012 attack was a reaction to a video that mocked Islam. Instead, the indictment details Mr. Khatalla’s orchestrated plans to attack the diplomatic compound, believing it to be a CIA outpost.

“On or before September 11, 2012, Khatalla informed others that there was an American facility in Benghazi posing as a diplomatic post, that he believed the facility was actually being used to collect intelligence, that he viewed U.S. intelligence actions in Benghazi as illegal and that he was, therefore, going to do something about this facility,” the indictment says.

While that information had been made public in other settings, it marks the first time the government has detailed it in open court documents.

“Ahmed Abu Khatallah’s role in the Benghazi attack is even clearer,” said George Venizelos, assistant director in charge of the FBI’s New York field office. “As the charges allege, he was the leader of an extremist militia group who carried out this brutal act of violence that took the lives of four honorable Americans.”

The new indictment supersedes the one-count indictment the government unveiled in June after Mr. Khatalla was captured and brought to the U.S. He is now charged with being part of the conspiracy and taking part in the actual attack that killed four Americans, including Ambassador J. Christopher Stevens.

Mr. Khatalla pleaded not guilty to the earlier indictment. He will be arraigned on the new charges Oct. 20, the Justice Department said.

In the immediate aftermath of the attack, which began the night of Sept. 11, 2012, and carried over into the morning of Sept. 12, the Obama administration said the attack was spurred by an Internet video mocking Islam. Hours earlier, a protest outside the U.S. embassy in Cairo had focused on the video.

But the indictment says Mr. Khatalla’s goal was in fact to destroy what he believed to be a U.S.-run intelligence-gathering outpost on Libyan soil.

The document also specifically ties Mr. Khatalla to Ansar al-Sharia, the extremist group that quickly claimed responsibility for the attack, a claim the administration initially publicly rejected. The indictment says Mr. Khatalla led Ubaydah Bin Jarrah, an Islamist militia, which merged in 2011 with Ansar al-Sharia, making Mr. Khatalla a leader of that organization.

Though he was identified as a target of the investigation early on, and though he gave interviews to American reporters, Mr. Khatalla wasn’t seized by U.S. Special Forces until this June.

The U.S. House has empaneled a special investigative committee to look into the Benghazi attack.

The committee had no immediate comment on the indictment Tuesday night.
In an interview with The New York Times weeks after the attack, Mr. Khatalla acknowledged being at the scene of the attack, but said he had been there to break up a traffic jam. He told the paper’s reporter he left, then returned later to help rescue a Libyan guard trapped in the U.S. mission.

However, The Times report quoted several fighters who said, on condition of anonymity, that Mr. Khatalla orchestrated the attack.

The new indictment suggests the U.S. has detailed evidence against Mr. Khatalla, including placing him entering the compound at exactly 11:54 p.m. the night of the attack.

In a detailed time line, the indictment says Mr. Khatalla drove to the compound and commenced the assault at about 9:45 as part of a group of about 20 armed attackers.

They soon ignited buildings in the compound, including setting the fire that led to the deaths of Stevens and State Department employee Sean Patrick Smith.

The attackers then regrouped outside the compound and launched a new attack at 11:15, gaining entry at 11:45 and beginning to plunder maps, computers and secret documents that detailed the location of an annex, which has since been reported to have been staffed by CIA operatives.

Mr. Khatalla entered the compound himself at 11:54 to oversee the plundering, the indictment says.

Soon after, he and his fighters went to an Ansar al-Sharia camp with some of the stolen documents, and then fighters began attacking the annex, which is where two American security contractors, Tyrone Woods and Glen Doherty, were killed.
Two other men, David Ubben and a man identified only as “Mark G.,” were wounded at the annex.

That may refer to Mark Geist, one of the security officers who has just penned a new book, along with other members of the security team, in which they say they were told to “stand down” but ignored that order and may have saved dozens of lives by doing so.