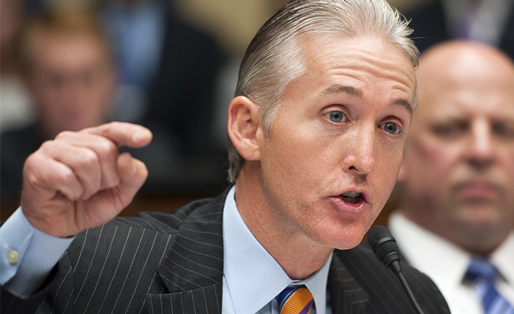 Something bothers me about the first and only hearing of the House Select Committee on Benghazi. Something I haven’t been able to shake.

It was a desultory hearing. That’s not the main thing that bothers me, but it grates. Many Americans still seek real accountability for the jihadist-empowering policies and recklessly irresponsible security arrangements that preceded the September 11, 2012, terrorist attack — to say nothing of the fraud and stonewalling that followed it. We were thus cheered when the GOP-controlled House finally appointed a select investigative committee . . . although we were equally puzzled why it took so much prodding, why Republican leadership seemed so reluctant. Five months have elapsed since then, and the committee has not exactly been a bundle of energy.

The panel is chaired by Representative Trey Gowdy. We were buoyed by that, too: He is an impressive former prosecutor from South Carolina. To date, though, he has convened just the one, remarkably brief public hearing. It was on September 17, a few days after the second anniversary of the Benghazi massacre, during which terrorists killed Ambassador Christopher Stevens and three other Americans: Sean Smith, Ty Woods, and Glen Doherty.

The hearing seemed to be a futile quest for buy-in from committee Democrats, whose mission is to undermine the legitimacy of an investigation their party opposed — one that, if thorough and competent, cannot but damage Hillary Clinton’s presidential ambitions. Representative Gowdy agreed to the minority’s request for a session that would explore the recommendations of the Obama State Department’s Accountability Review Board (ARB) and the administration’s diligent implementation thereof.

The ARB probe, conducted by Washington fixtures handpicked by then–Secretary of State Clinton for damage-control purposes, was hopelessly conflicted. It failed to interview key witnesses — including, natch, Mrs. Clinton herself. Its recommendations are thus of dubious value. More to the point, they are far afield from the salient matter: accountability for the disastrous decisions, actions, and omissions before, during, and after the attack.

It was obvious why Democrats wanted a hearing focused on the ARB recommendations. It could nicely frame their contention that Benghazi has already been thoroughly investigated by bipartisan Beltway eminences who found fault (though not much, and not by anyone of significance) and proposed fixes, which fixes the Obama administration anxiously and responsibly adopted. End of story, which after all, dude, was like two years ago.

In spinning this yarn, Democrats could not have chosen a more perfect witness: Gregory Starr, assistant secretary of state for diplomatic security. Mr. Starr is a highly experienced diplomat, articulate with just the right edge of condescension, and, best of all, out of the loop on anything of consequence. He wasn’t at State when Benghazi happened. He was brought back to the Department by Mrs. Clinton’s successor, John Kerry, after a stint at the UN. He was therefore perfectly positioned to give forceful soliloquies about how crucial personnel security is to the State Department and the Obama administration, yet able to dodge any questions about the unconscionable security lapses in Benghazi under Secretary Clinton.

To their credit, committee Republicans did a fine job debunking the Democrats’ narrative. Chairman Gowdy in particular was characteristically effective in showing that the ARB recommendations were essentially the same ones proposed, and quickly forgotten, after every terrorist attack on a government facility over the past three decades. He also pointed out that security for high-threat facilities was supposed to be personally approved by the secretary of state, not a subordinate — a problem given that, under Secretary Clinton, security in Benghazi wasdecreased despite attacks, threats, and expert assessments that clearly signaled an intensifying threat.

Still, there was no reason for committee Republicans to put themselves in a defensive posture. Chairman Gowdy decides what the hearing topics will be. In the days before the hearing, three security contractors assigned to protect the CIA annex in Benghazi went public with allegations that they’d been obstructed by superiors when they tried to come to the aid of the Americans under attack. The delay may have cost lives. Was that not more to the point of the select committee’s mission — more appropriate fodder for its much-anticipated first hearing — than the ARB recommendations?

Of course, we conservatives are used to GOP accommodations designed to both entice Democrats into good-faith cooperation and impress the media with how bipartisan or, in Gowdy’s framing of it, how non-partisan Republicans can be. The civility and sobriety are always unrequited, yet they keep trying.

But that is not my main problem. What really bothers me is what happened toward the end of the hearing.

It was the day’s most dramatic exchange: Representative Gowdy was questioning Secretary Starr. The chairman had expertly set the stage by adducing Starr’s agreement that diplomatic security in dangerous places is a cost-benefit analysis. That is, the degree of risk tolerated depends on the government’s calculation of the benefit derived from whatever mission requires an American presence. With his witness thus cornered, Gowdy pounced: There being no more perilous place on the planet for Americans than the jihadist hornet’s nest of Benghazi, he asked Starr,

We know the risk of being in Benghazi. Can you tell us what our policy was in Libya that overcame those risks? In other words, why were we there?

Starr tried to dance away, going into a speech about how such questions “have been fundamental to the Department for over thirty years,” and that there have thus been evacuations, removal of family members, reductions of personnel, etc. Gowdy, however, would have none of it — after all, none of the measures Starr listed was taken in Benghazi. So again, the chairman demanded,

We know the risk in Benghazi. My colleagues and you and others have done a wonderful job of highlighting some of the “trip wires” — I think [that] is the diplomatic term. What policy were we pursuing in Libya that was so great that it overcame all of the trip wires?

After some hesitation, Secretary Starr meekly replied: “Not being here at the time, sir, I cannot answer that question for you.”

Starr’s job is diplomatic security and, as he conceded, it cannot be done without knowing the administration’s policy objectives. Regardless of what his responsibilities were when the Benghazi massacre occurred, he cannot responsibly do his current job without knowing what the government’s policy was at the time. Libya has been steadily disintegrating ever since the attack — in fact, our embassy in Tripoli recently had to be evacuated just before being stormed and taken over by jihadists. It is inconceivable that Starr does not know what the Libya policy was.

But that is just half the equation. When a knowledgeable witness refuses to answer a critical question, the interrogator does not just let him off the hook. The witness gets grilled: Isn’t it a fact that the policy was X?

Gowdy did not grill Starr. And Gowdy — the chairman who has access to the intelligence the committee has been gathering for five months, the accomplished prosecutor who is not fool enough to ask a key question to which he did not know the answer — did not fill in the information gap. He abruptly ended the hearing, content to leave the policy shrouded in mystery.

In the midst of Libya’s civil war, the United States government decided to switch sides — we went from support for the Qaddafi regime that had been regarded as a key counterterrorism ally to support for “rebels” who very much included the anti-American jihadists Qaddafi had been helping us track. That was not just an Obama-administration policy preference; it had strong support from prominent senior Republicans in Congress. The toppling of Qaddafi that resulted enabled jihadists to raid the regime’s arsenal. That has greatly benefitted both al-Qaeda and the Islamic State terrorists currently rampaging in Iraq, Syria, Libya, and much of northern Africa.

Meanwhile, the Obama administration, again with significant Republican support, decided to aid and abet Syrian “rebels” who, as in Libya, very much included anti-American jihadists. There is colorable suspicion that this assistance included the gathering up of arms in Libya for shipment to Syrian “rebels.” Abdelhakim Belhadj, the al-Qaeda operative who was Ambassador Stevens’s “rebel” point-man in Benghazi, was clearly involved in at least one major shipment of weapons that went to Syrian “rebels” — including to some of the jihadist groups the United States is now bombing. That shipment was coordinated by Turkey, a country with which Ambassador Stevens, Secretary Clinton, and President Obama worked closely — a country whose ambassador was the last diplomat Stevens met with in Benghazi before being killed.

There will be no accountability for the Benghazi massacre absent a full public airing of what the United States government was doing in that most dangerous of places: Setting up shop among anti-American jihadists and staying there like sitting ducks even as other countries and international organizations pulled out. What was the benefit? Trying to limit the damage caused by switching sides in Libya? Fueling a new jihadist threat in Syria and Iraq — the very one we are now struggling to quell?

In Washington, there seem to be a lot of people resistant to a full public airing of the policy. They may not all be Democrats.

— Andrew C. McCarthy is a policy fellow at the National Review Institute. His latest book is Faithless Execution: Building the Political Case for Obama’s Impeachment.