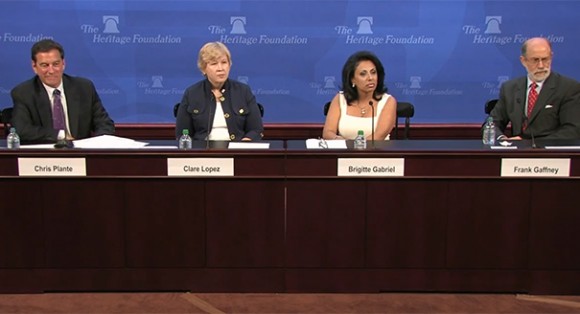 When conservatives taunt Muslims in the room, they apparently thank them for their questions, and say, “Well, I’m glad to see you’re representing Muslims in this company.” This is then translated by the press into the “ugly taunting” of an innocent American University law student who just wanted to ask a question which was, by the way, off the topic of the panel at hand.

Chris Plante, on his Washington-based WMAL radio show, remarked the next day that he and the panel should have said that her question regarding Muslims wasn’t on topic and moved on. Then, Plante asserted, The Washington Post’s Dana Milbank would have had to come up with a different smear. (Plante was the moderator of the panel held by the Benghazi Accountability Coalition (BAC) at The Heritage Foundation on June 16th.)

Indeed, Milbank takes delight in smearing conservatives, and prefers to target their character instead of addressing the substance of their message. When Accuracy in Media and the Citizens’ Commission on Benghazi held a conference on the Benghazi attacks last September, Milbank impugned the group as a bunch of conspiracy theorists. Apparently, he must shoot the messenger if he can’t address the message. But that is a strategy best reserved for the leftist Media Matters, not The Washington Post. As I remarked then, “Milbank is the reporter the Post usually sends out to cover events where conservatives gather so he can offer his sarcastic little commentaries to belittle the people involved.”

Thus, Milbank starts his latest column with “Representatives of prominent conservative groups converged on the Heritage Foundation on Monday afternoon for the umpteenth in a series of gatherings to draw attention to the Benghazi controversy.” Clearly, Milbank is already bored with what he views as a phony scandal and looking for something to spice up his column.

Saba Ahmed, a questioner in the audience, provided him with the perfect opportunity, presenting herself as an American University law student—a position that Milbank parroted in his column. But this was a lie by omission—or sheer lack of journalism. Milbank fails to note that Ahmed ran for Congress in Oregon, is a leftist activist, runs her own lobbying firm, and was close to the Christmas bomber terrorist, facts all recounted in an AIM-exclusive column by James Simpson.

In a blatant misrepresentation of the facts, Milbank writes that “One questioner said he had heard that Gen. Carter Ham, then-commander of U.S. Africa Command, had been ‘placed under house arrest’ at the time of the Benghazi attack.”

“‘I’ve heard the same story,’ Plante seconded,” continues Milbank. He then fails to point out that Plante turned to Citizens’ Commission on Benghazi Member Clare Lopez, a retired CIA officer, to dispel this rumor and clear the air regarding General Ham. Readers are instead left with the impression that the panelists believe this rumor.

Instead, he impugns Lopez for saying that “perpetrators of the attack are ‘sipping frappes with journalists in juice bars.’” This was a reference to the CNN’s infamous interview of Ahmed Abu Khatalla, perpetrator of the Benghazi attacks, at a public coffee shop in that city. This demonstrates Milbank’s lack of knowledge of basic facts about the Benghazi case at the time, which is probably why he steered clear of the subject.

Milbank attempted to recover himself on Al Sharpton’s show on MSNBC by noting that Abu Khattala had already been captured by military commandos over the weekend, a fact not made known by the Post until June 17—the day after Milbank wrote his column.

Members of the media were quick to pick up Milbank’s story of Muslim victimization occurring at the Heritage Foundation event, which was, in this case, organized by the BAC. “The Heritage Hate Panel Features Two Leading Islamophobes,” wrote Dean Obeidallah for The Daily Beast. “Why has hate become a part of mainstream conservatism?” he asks. Obeidallah uses the Southern Poverty Law Center and Media Matters as his sources. SPLC labels Frank Gaffney and others as “Islamophobes” for their beliefs, and calls Gaffney “the anti-Muslim movement’s most paranoid propagandist.”

This is how Gaffney began his response to Ahmed at Heritage: “Well, I’m glad to see you’re representing Muslims in this company. I don’t want to speak for anybody else but myself, but I think I can say safely that there isn’t anybody on this panel that thinks that all Muslims are the problem, and I certainly don’t. … ”

And then, at Salon.com, Joan Walsh wrote in “The right’s hateful freak show: Dana Milbank vs. Heritage Foundation’s abuse” that “the firestorm over Milbank’s column shows how hard even nominally mainstream reporters will work to excuse increasingly unhinged rhetoric on the right.” She disagrees with Dylan Byers of Politico, who criticized Milbank for misrepresenting the panel.

Byers’ column is a rare breath of fresh air from a normally complicit mainstream media; analyzing the video, Byers takes apart Milbank’s column and says that the electronic evidence does not match his conclusions. “Video of that panel has since surfaced and—in my view—Milbank grossly misrepresented the nature of that exchange,” writes Byers. “In fact, it’s worth noting that Ahmed didn’t appear at all troubled or upset at the end of the exchange.”

Milbank tweeted back to Byers that he would be happy to provide an audio in which Ahmed communicated afterwards that she felt “targeted.” How targeted can you feel when you bring the issue up entirely by yourself? After all, the subject of the panel discussion was Benghazi, not the state of Muslim-American relations.

But apparently the release of the video was not enough to quiet complaints, and MSNBC was sure to pick up the story. “It’s like the greatest hits of a far-right website!” remarked Sharpton about the panel. He failed to show the conciliatory responses that panelists made to Ahmed and cut right to Brigitte Gabriel’s Germany comparison—cutting out that Gabriel also mentioned Russia, China and Japan. Milbank went on the Al Sharpton show and said that Byers didn’t know what he was talking about because he didn’t attend, and based his analysis on a nine-minute video clip. Milbank said that it “devolved into this sort of Muslim baiting gradually over the entire thing.”

I was there. As a matter of fact, I was standing about five feet from Ms. Ahmed during most of the exchange. And while the audience clearly was supportive of Gaffney and Gabriel, Milbank’s characterization that “the reaction in the crowd—the long, standing ovation, the cheers for Gabriel, the fingers pointed at Ahmed, the war whoops—was intense, and a bit scary,” is absurd. I urge people to read Byers’ column for a detailed analysis of what was actually said—and not said—and watch the video. Ms. Ahmed wasn’t attacked or jeered.

Actually, once this panel—and Ahmed’s question—were over, all questions returned to Benghazi, as well they should. You can view the entire event on the Heritage website for yourself.

The press is geared toward sensationalism, and this is understandable. But Milbank’s misrepresentation of the facts is inexcusable. Those arguing that Heritage represents hate and anti-Muslim bias continue to base their “facts” on the misrepresentations of Media Matters, the SPLC, and Milbank himself—whose reputation, such as it is, is at stake. They should all be taken with a grain of salt.