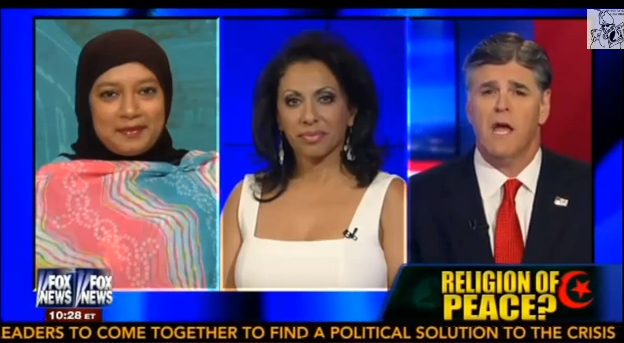 Just days after author and terrorism expert Brigitte Gabriel made headlines for firmly responding to American University law student Saba Ahmed’s question during a panel discussion about Benghazi, TV host Sean Hannity decried radicalism and challenged Ahmed, a Muslim, to also speak out against it.

Hannity, who had Ahmed and Gabriel on his show Thursday, said that he doesn’t hear enough moderate Muslims decrying acts of violence, noting that women who live under Shariah law are often forced to wear headscarves, are banned from driving vehicles and need four male eyewitnesses to prove rape, among other regulations.

“Well, I mean I’m not being forced as a Muslim women to wear the headscarf,” Ahmed responded. ”I don’t think anybody should be telling people … what to wear … it’s their choice.”

But Hannity said that wasn’t his point, continuing to press Ahmed, asking whether she will “speak out against Shariah as it’s implemented.”

“I’m not speaking out, I’m just defending my right to wear the headscarf,” she responded, skirting the direct question.

Hannity wasn’t done there, though. He asked her to speak up for women’s rights globally — and she responded that “every country has its own traditions, laws and culture.”

Still unsatisfied and looking for a more direct answer, he asked whether she believes these customs are “wrong.”

“There are right and wrong customs everywhere,” Ahmed continued.

In the end, Hannity passionately maintained that violence is happening in the name of Islam and that he believes Ahmed and other believers should speak out.

“I’m against a lot of the barbaric practices around the world,” Ahmed said. “I think Islam has been misused by a lot of people.”

Watch the segment below: