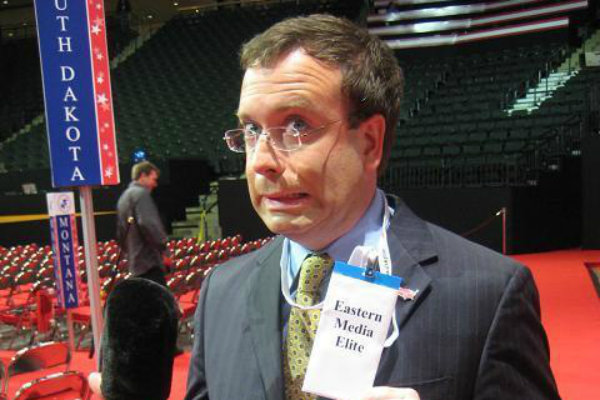 I had a ringside seat on Monday as a “mainstream media lapdog” performed for his masters in the Obama administration. What made it a man-bites-dog story, though, is that theWashington Post’s Dana Milbank was so abject in his submission that he was called out for it even by an organ of the Left like Politico.

Milbank used his column in the Post on Tuesday entitled “Heritage’s Ugly Benghazi Panel” to smear an event he attended and I participated in at the Heritage Foundation the day before. The occasion was the launch of an initiative clearly unwelcomed by Team Obama and its press poodle: the Benghazi Accountability Coalition.

The coalition is a pick-up team of national security, law enforcement, intelligence and other public policy practitioners, experts and activists and is chaired by former federal prosecutor Andrew McCarthy. We share a common determination to support the new House Select Committee on Benghazi in ferreting out the truth about what led up to, occurred during and happened after the jihadist attacks that killed four Americans on September 11, 2012. We are also prepared to hold the select committee’s members accountable if they fail to fulfill this duty.

It is instructive that, out of nearly four hours of compelling presentations and often-newsworthy pronouncements by, among others, former three-star generals, a one-time U.S. Attorney, former senior Justice Department officials, a career clandestine service operator with the CIA and several best-selling authors, Milbank seized upon, then distorted, a single line of questioning and the responses it generated.

Milbank’s gambit fit the pattern of deflection and defamation by a press corps that – with few exceptions – slavishly defends President Obama and his subordinates, no matter how outrageous their perfidy and misconduct.

To be precise, Milbank failed accurately to report and in some cases outright mischaracterized several exchanges prompted by an intervention from the audience in the form of a statement/question by a self-described “law student at American University.” The hijab-wearing young woman warned that the West was failing to understand that we are confronting a hostile ideology.

In Milbank’s rendering, the program “deteriorated into the ugly taunting of a woman in the room who wore an Islamic head covering.”

After examining a videotape of the program, however, Dylan Byers of Politico responded that “Milbank grossly misrepresented the nature of that exchange.” He added that, “I do believe that the video disproves or casts doubt on several of Milbank’s assertions.”

That is putting it charitably. Milbank, like the Obama administration, wants to shoot the messengers on Benghazi. The immediate object is to obscure the message, but if in the process the messengers are taken down, so much the better.

Perhaps Milbank was made even more aggressively hostile to the conservative presenters and their coalition by the fact that a recovering member of the mainstream media, popular Washington talk show host Chris Plante, took him on straight out of the box.

Plante was the moderator of the first panel and unburdened himself at the outset of sharply worded complaints about the implications for the Republic if the “mainstream media” persists in its studied disinterest about – and, thereby, its enabling of – conduct that might put the Obama administration in a bad light. Describing such journalists as “lapdogs” for this presidency, Plante specifically called out theWashington Post for not pursuing assiduously the myriad questions about each of the three phases of the Benghazigate scandal that cry out for answers.

It remains to be seen how, if at all, repudiation by comrades on the Left, the snatch-and-grab capture in Libya of one of the alleged perpetrators of the Benghazi attacks and the actual performance of the Gowdy select committee will be reflected in Dana Milbank’s reporting going forward.

The thing we do already know is that, if there were anything “ugly” about Monday’s event at Heritage it was not because of what members of the Benghazi Accountability Coalition actually said or did. What truly was ugly was how Milbank shamelessly distorted the proceedings, with the evident purpose of discrediting and sliming the Coalition’s members and messages.

But he and others among the Obama administration’s partisans are on notice: We are here to declare enough of such behavior. And most especially to ensure that it will not be tolerated in the critically important months to come.

This article can be read at Breitbart News