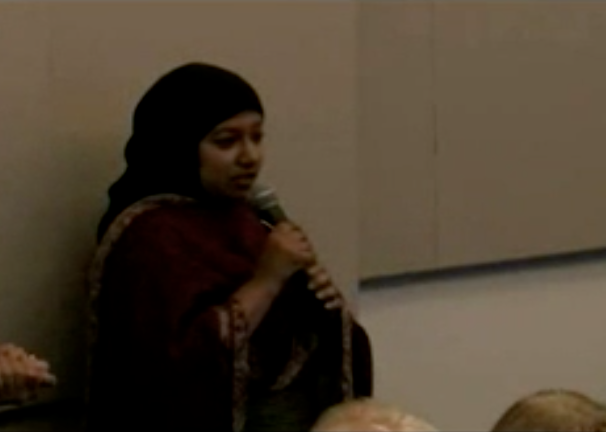 A Heritage Foundation panel focusing on the Benghazi controversy went a bit off topic when an American University law student named Saba Ahmed took the opportunity to ask a question:

“I know that we portray Islam and all Muslims as bad, but there’s 1.8 billion followers of Islam.”

“We have 8 million-plus Muslim Americans in this country and I don’t see them represented here.”

“How can we fight an ideological war with weapons?”

“The Jihadist ideology that you talk about; it’s an ideology. How can you ever win this thing [War on Terror] if you don’t address it ideologically?”

“What I find so amazing is since the beginning, which we we are here about the Benghazi attack against our people.”

“Not one person mentioned Muslims, we are here against Islam, or we are launching a war against Muslims.”

“We are here to discuss how four Americans died and what our government is doing.”

“We were not here to bash Muslims. You were the one who brought the issue about most Muslims, not us.”

“And since you brought it up, allow me to elaborate with my answer.”

“There are 1.8 billion Muslims in the world today. Of course not all of them are radicals. The majority are peaceful people.”

“The radicals are estimates to be between 15% to 25% according to all intelligence services around the world. That leaves 75% of them a peaceful people.”

“When you look at 15% to 25% of the world Muslim population, you’re looking at 180 million to 300 million people dedicated to the destruction of the United States.”

“I assume, are you an American?”

“When you look at the lessons of history, most Germans were peaceful, yet the Nazis drove the agenda. And as a result 60 million people died. 14 million in concentration camps. 6 million were Jews.”

“The peaceful majority were irrelevant.”

“And since you’re the only Muslim representative in here, you took the limelight.”

“So as an American citizen you sat in this room and instead of standing up and asking something about our four Americans that died and what our government is doing to correct the problem, you stand there to make a point about peaceful moderate Muslims.”

“It is time we take political correctness and throw it in the garbage where it belongs.”

After extended applause from the crowd, Ahmed was given a chance to comment:

“Thank you for your responses.”

“But, as a peaceful Muslim, I’d like to think that I’m not that irrelevant.”

“I’m just as much of an American and I’m very deeply saddened about the lives that were lost in Libya and I hope that we will find justice for their families.”

“But I don’t think that this war can ever be won by just the military. You have to bring Muslims to the table to address this.”

The panel’s moderator, conservative radio host Chris Plante, agreed with Ahmed, “I think everyone agrees that it can’t be won just militarily.”

Then Plante added, “Can you tell me who the head of the Muslim peace movement is?”

With that the panelists smiled as they applauded with the crowd.