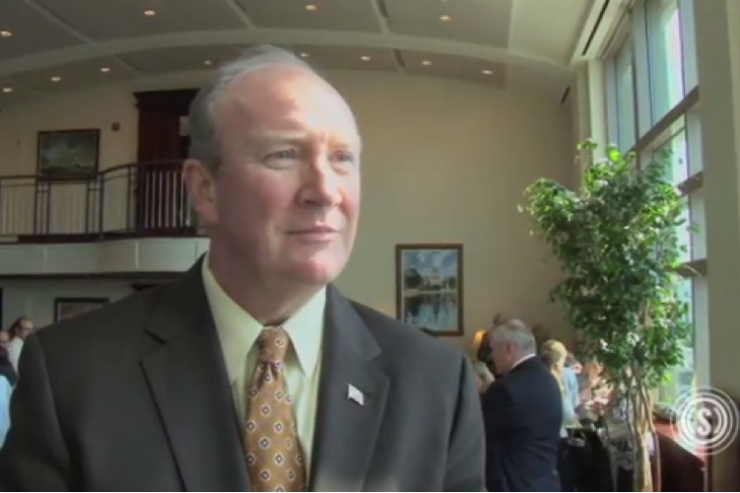 The Justice Department’s charges against Khatallah are curiously sparse.

By Andrew C. McCarthy
What happens when the president who has politicized law-enforcement to a degree unprecedented in American history meets a terrorist responsible for killing Americans he has recklessly failed to protect, decimating his pretensions about “decimating”al-Qaeda?

What happens is: You get the most politicized terrorism indictment ever produced by the Justice Department. Behold United States v. Khatallah, Case No. 14 Crim. 141, quietly unsealed in a Washington courtroom last Saturday while the country dozed off into summer-vacation mode.

Ahmed Abu Khatallah, of course, is the only suspect apprehended in connection with the Benghazi massacre, a terrorist attack on a still-mysterious U.S. diplomatic installation. J. Christopher Stevens, the United States ambassador to Libya, and three other Americans — State Department official Sean Smith and two former Navy SEALs, Tyrone Woods and Glen Doherty — were killed. Until recently, such attacks have been known as acts of war carried out by the enemy. In the age of Obama, they are now known as “crimes” for which “defendants” like Khatallah are “brought to justice” — rather than brought to Gitmo. Meaning: They are whisked into our country when no one’s paying much attention. The red carpet is rolled out at a federal courthouse, where the “defendant” is given Miranda warnings, taxpayer-funded counsel, and all the rights of the American citizens they plot to kill, including lavish discovery-of-intelligence files relevant to their civilian trial.

Gold-plated due process for our enemies begins with the constitutional right to an indictment returned by a grand jury, providing the “defendant” with notice of the charges against him. In Khatallah’s case, the first thing you’ll notice is that the indictment is tiny: less than two pages long — 15 measly lines of text once you discount the caption, citations, and signature lines. This is a startling departure from Justice Department indictments in jihadist terror cases, a turn to brevity that cannot be explained solely by Obama’s banning of words like “jihadist” from the government lexicon.In big criminal cases — and there are none bigger than those involving terrorist attacks — indictments tend toward book length, written in a narrative style designed to cut through the legalese and explain what happened. See, if the prosecutor is ethically convinced that there is sufficient evidence to convict an accused terrorist, his duty is to plead the case as expansively as necessary to get that evidence admitted.

In terrorism cases, that has always meant fully describing the nature of the terrorist enterprise. Look at the Justice Department’s jihadist cases from the Nineties (see e.g., here). They explain the history of the international jihadist network; the different terrorist organizations and state sponsors it encompasses; the identity, status, and roles of the players; plus all of the different plots and attacks that knit the network together.

The idea is to frame the case in a way that completely and coherently relates it — making it easier for judges to admit controversial evidence and jurors to grasp the willfulness of the accused. That is why the most critical decision made by the prosecutor drafting a terrorism indictment is Count One — i.e., the first statutory offense alleged.

Because jihadist terror is concerted activity involving many terrorists and organizations, the first count should always be an overarching conspiracy charge that sets the stage for a full exposition of what the defendants did and why they did it. In the Blind Sheikh indictment I wrote in 1993, Count One was a five-year, still ongoing “conspiracy to wage a war of urban terrorism against the United States” (charged under the Civil War–era seditious conspiracy statute in the federal code). In the indictment filed after al-Qaeda bombed the American embassies in Kenya and Tanzania in 1998, Count One was a near decade-long, ongoing “conspiracy to kill United States nationals” (charged under a statute addressing “acts of terrorism transcending national boundaries” added to the code in the 1996 overhaul of anti-terrorism law). Such opening charges, framing the main themes of the prosecution, are generally prefaced by a descriptive introduction, unfolding the enterprise from its origins through its evolution in the months and years that followed — often right up to the date the indictment was filed.

Pleading the conspiracy this way enables prosecutors to prove “background evidence” — showing how the players came to know each other, and how those relationships logically evolved into a conspiratorial enterprise with a structure and hierarchy. Moreover, because the law presumes that a conspiracy continues indefinitely until its objectives are achieved, the prosecutor who alleges that the conspiracy has continued even after its latest terrorist atrocities maximizes the chances of having any newly discovered evidence ruled admissible. After all, if the principal conspiratorial agreement is to levy war on the United States or mass-murder American nationals, the conspiracy does not end just because a skyscraper or an embassy has been bombed. There are still members of the terrorist organization at large, they still seek to kill Americans, and their ongoing activities (e.g., bombings to retaliate for arrests) could help cinch the case.

Traditionally, the Justice Department handles things this way because the point of prosecuting the case is to obtain convictions on the most serious, readily provable charges that can be brought. A terrorist should be charged and convicted as a terrorist, not for some lesser offense. The more the evidence is allowed to sing for itself, the more the prosecutor is seen as revealing the truth rather than trying to shape or shade it. Jurors, using their common sense, gain confidence that the whole truth is being presented and that the accused truly are guilty of heinous crimes.

It seems, however, that the Khatallah prosecution is following a different strategy.

Khatallah has been identified by the State Department as a “senior leader” of Ansar al-Sharia, one of the al-Qaeda-tied franchises in Libya. Yet there is no mention of Ansar al-Sharia in the indictment, much less of al-Qaeda or the Islamic-supremacist ideology that ties jihadist affiliates together. In fact, the indictment does not even accuse Khatallah of being a terrorist.

This fact has been missed in the coverage. Most reporters are not lawyers. They see that the indictment does charge a conspiracy, and that this conspiracy does involve terrorism, so they understandably assume it must be a standard terrorism conspiracy indictment. But look more carefully. Khatallah is not charged with being a member of a terrorist conspiracy to kill Americans or attack American facilities. He is charged with the lesser offense of conspiring to provide material support to these terrorists – nameless and not further described.

In other words, the Justice Department is not alleging that Khatallah himself was a terrorist. It is saying that there were some elusive “terrorists” hanging around Benghazi, and Khatallah conspired to help the “terrorists” by contributing personnel — mainly, himself — to their machinations, knowing that these just might include preparation for a lethal attack on a U.S. facility.

Oh, and the duration of this conspiracy? It is alleged to have lasted about one day — i.e., from approximately sometime on September 11, 2012, to sometime after midnight September 12.

One day. In fact, maybe it was just a few hours.

Think about that. Radical Islam’s war against the United States has been underway for over 20 years. Eastern Libya has been an al-Qaeda hotbed for much of that time. That is why our government financially supported Muammar Qaddafi: His regime was providing intelligence on terror hubs like Benghazi and Derna, from which jihadists launched to fight American troops in Iraq. When President Obama turned on Qaddafi, terrorist organizations like Ansar al-Sharia were the beneficiaries. In the months before September 11, 2012, they repeatedly attacked Western targets in Eastern Libya — including one bombing attack on the U.S. diplomatic installation itself. Although this jihadist campaign induced other countries to pull their personnel out of the region, Obama and Secretary of State Hillary Clinton not only left ours in, they reduced security.

Yet none of that finds its way into the indictment. Nothing about the background of anti-American jihad in Benghazi. Nothing about a previous attack on the U.S. diplomatic installation that jihadists themselves described as retaliation for the American killing of al-Qaeda’s leader in Libya, Abu Yahya al-Libi (Hassan Mohammed Qaed). Nothing about al-Qaeda’s emir, Ayman al-Zawahiri, publicly calling for Libyan jihadists to avenge al-Libi by “fighting and killing the crusaders” — after all, hadn’t Obama already “decimated” al-Qaeda? Nothing about the attacks against British diplomats and the Red Cross. Nothing about Khatallah’s position as an Ansar al-Sharia commander, nothing about the fact that he had been inveighing against the presence of an American facility in Benghazi in the days before September 11, and nothing about the Ansar al-Sharia forces marshaling outside the facility before the attack — armed with rocket-propelled grenade launchers, AK-47 rifles, and other weapons.

Nothing about a long-running, ongoing jihadist war against the United States.

Instead, the indictment is written to portray a sudden, spontaneous eruption of violence, without much planning or warning, in which Khatallah — who knows . . . perhaps inspired by a video — abruptly joined a disgruntled group of protesters that turned out to include some shady terrorists motivated by . . . well, who can really say? All we know is the violence started without warning and, before you could scramble a fighter-jet or fuel up Air Force One for a Vegas campaign junket, it was all over.

There are a lot of downsides to giving enemy-combatant terrorists all the majesty of American due process. But at least it used to mean that, by the end, you’d have the truth, the whole truth, and nothing but the truth. Now, it’s starting to look like what you get on the Sunday shows.

— Andrew C. McCarthy is a policy fellow at the National Review Institute. His latest book, Faithless Execution: Building the Political Case for Obama’s Impeachment, was released by Encounter Books on June 3.