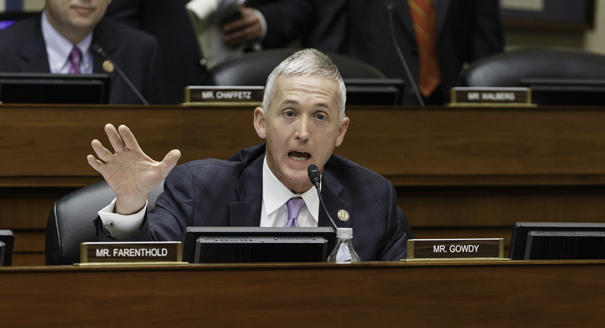 There are no Benghazi hearings on the House calendar, but the silence doesn’t mean the investigation is fading away.

Rep. Trey Gowdy is launching a special committee to wrangle a probe that’s sprawled across the jurisdictions of multiple headline-hungry committee chairmen.

And while the South Carolina Republican isn’t committing to specifics, such as whether there will be public hearings with high-profile witnesses like former Secretary of State Hillary Clinton, his methodical approach could help the GOP savor a scandal that has at times looked more like a political sideshow.

“No one [has] defended the five-minute questioning [process] as the most calculated way of eliciting the most amount of information,” Gowdy said in an interview. “There is most assuredly a place for hearings but not if your primary focus is to gather facts.”

While there isn’t much happening publicly, the House select committee investigating the Sept. 11, 2012, attacks on the U.S. facility in Benghazi, Libya, is busy behind the scenes.

The panel is examining subpoenas from committees that previously investigated the Benghazi attacks to develop a list of unanswered questions from the Obama administration. There is also outreach to agencies that received requests for information.

Meanwhile, Gowdy is planning a series of closed-door meetings this month that could include a screening of a classified video from the Benghazi compound. He’s also checking with the 11 other lawmakers on the panel about working through the August recess.

And committee leaders from both parties are busy staffing up.

The response to the 2012 attack on a diplomatic mission in Benghazi deeply divided Congress. The attack left four Americans, including Ambassador Chris Stevens, dead. Republicans accuse the Obama administration of covering up evidence that the attack was linked to terrorism while Democrats argue the GOP is simply drumming up a scandal.

As the committee’s investigation unfolds, perhaps the biggest challenge for Gowdy is to prove that his work isn’t simply a partisan exercise.

“I don’t want to appear naive but I do hold out some hope that a few things left remaining in politics, or in our society, can be above politics,” Gowdy said. “People who have worked with me in the past and the people on the other side of the aisle who I work with now, I don’t think they are at all surprised this is the approach that I am taking. My goal is to find out what happened.”

So far, Gowdy seems to be forging productive relationships with Democrats. He meets regularly with Maryland Rep. Elijah Cummings, the top Democrat on the panel, and the two often chat privately in the speaker’s lobby during House votes.

“I have a great working relationship with Chairman Gowdy, and I am hopeful that this will be the serious, bipartisan fact-finding investigation that he has promised,” Cummings told POLITICO.

Speaker John Boehner (R-Ohio) gave Gowdy a loose set of guidelines to pursue his investigation: Determine how the attacks occurred and issue recommendations on ways the U.S. could avoid future assaults on diplomatic outposts. Gowdy isn’t setting a timeline for the committee, but the investigation is expected to extend into 2015.

The committee has been allocated an expansive budget from the House. The panel has $3.3 million to spend this year on operations, according to documents from Minority Leader Nancy Pelosi’s office.

The budget was first reported by USA Today.

Panel members are already examining the notes, documents and interview transcripts provided by the other congressional committees that investigated the terrorist attacks, including the House Oversight and Government Reform, Armed Services, Foreign Affairs, Intelligence and Judiciary committees.

That amounts to nearly 25,000 pages of documents, Gowdy said, which all need to be reorganized and categorized for the new committee.

“They have to be assimilated,” he said. “I was on OGR, but I would have no way of knowing what Intel or HASC had or how it was cataloged.”

Beyond sifting through documents, Gowdy said most of the focus right now is on hiring employees for the committee. He plans to personally interview job candidates, but finding qualified staffers with the appropriate security clearance is a slow-going task. The committee will dive into classified material, which limits much of the staffing pool to those with established clearances.

“Obviously, going from not existing to fully functioning takes some time,” Gowdy said. “Hiring staff is widely important but not always terribly exciting from a reader’s or viewer’s standpoint. …. You have to do that before you can fully constitute a committee and start work.”

Republicans tapped former Smith-Free Group Vice Chairman Phil Kiko as the panel’s staff director in May. The party hopes to fill roughly half of the staff positions by the end of July.

Democrats on the committee recently hired Susanne Sachsman Grooms as their staff director. She is a former Department of Justice prosecutor, who was the lead attorney for Oversight Committee Democrats on three highly controversial investigations: the Fast and Furious gun-walking operation, the IRS targeting of tea party groups, and Benghazi.

This report first appeared at Politico.