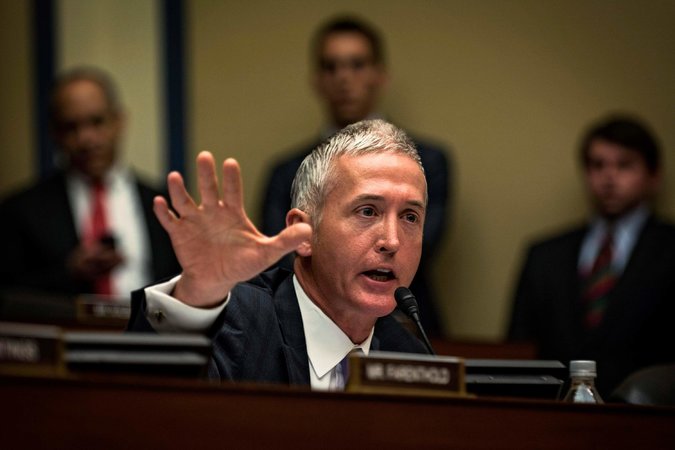 WASHINGTON — Representative Trey Gowdy was cutting the grass in the front yard of his Spartanburg, S.C., house when Speaker John A. Boehner called with a special assignment.

Mr. Gowdy, a South Carolina Republican and a former prosecutor whose peculiar hairstyle has generated almost as much news media coverage as his voting record, has made a name for himself over his barely two terms in office with his tenacious questioning of Obama administration officials in committee rooms. Yet his relationships with Democrats on Capitol Hill are far more nuanced than many of his conservative brethren.

Which made him the speaker’s ideal choice for leading a new politically charged congressional committee investigating the 2012 attack on the diplomatic mission in Benghazi, Libya. Despite skepticism in many quarters, Mr. Gowdy promises a process — which began Wednesday when his full committee met for the first time — that will be both plodding and fair.

“This will not be what people on the left fear it is going to be,” Mr. Gowdy said over lunch at the Capitol Hill Club, a dining room for Republicans where he has the same dinner — varying species of fish as well as fresh fruit — every night that Congress is in session, most often with his fellow South Carolina Republican, Senator Tim Scott.

Nearly two years after the attack in Libya that killed the United States ambassador there, J. Christopher Stevens, and three other Americans, Democrats are increasingly angry that Republicans are not relenting in their criticism of the administration over Benghazi, which has already been examined by six congressional committees. To them, the issue has devolved from national tragedy to partisan farce.

“The day the committee was announced, Republicans began fund-raising off it,” said Representative Steve Israel of New York, who also leads the committee to elect House Democrats.

Yet many lawmakers on both the Oversight and Government Reform Committee and the House Judiciary Committee who serve with Mr. Gowdy — as well as some Obama administration officials who have entered his jurisdictional cross hairs — say he may be the most favorable Republican for the job. (For one, they say that he has not been fund-raising off his work on the committee and that he is critical of the practice.)

“Trey has a real existential moment of what imprint he wants to make,” said Representative Gerald E. Connolly, Democrat of Virginia, who serves with Mr. Gowdy on the oversight committee. He can be, Mr. Connolly said, “another partisan flare who came and went, or acquit himself as an honorable person, which I think he is.”

“If he does that, he will be a very serious player in the United States Congress,” Mr. Connolly said.

Richard W. Vieth, a criminal defense lawyer who worked with Mr. Gowdy as a prosecutor and later against him in courtrooms, echoed that assessment. “He was someone I knew I could trust,” he said. “But I knew in the courtroom he’d be very combative.”

Mr. Gowdy’s habits of tearing up during floor speeches, ripping into witnesses and general acts of excoriation find their roots in his 16 years of prosecutorial work in South Carolina, where his record of convictions in more than 100 cases was nearly unblemished.

His style was foreshadowed in his emotional closing arguments, as in a 2008 case of the murder of a married couple. “Sometimes death walks slowly and knocks gently,” he said, describing the crime to the jury. “Sometimes it kicks in the front door.”

Mr. Gowdy’s passion for debate surfaced early in life, when he would argue politics with his parents and three sisters at the dinner table, said his mother, Novalene Gowdy. “If he were still in the law and I committed a crime, he’d prosecute me,” she said. “He is very law oriented.”

A quick wit, love of metaphors and penchant for quoting philosophers were Mr. Gowdy’s hallmarks. “I might be showing him a house,” said Mr. Thornton, a home builder in Texas, “and he will drop a reference to Kierkegaard.”

Mr. Gowdy graduated from college in 1986 with a degree in history, went on to the University of South Carolina School of Law and clerked for two judges. After a family friend was murdered in Charlotte in 1994, he said he “felt a strong pull to be a prosecutor.”

He worked as an assistant United States attorney until 2000, then took on a sitting solicitor and won, continuing to prosecute for the next decade. In 2010, he routed Representative Bob Inglis in the Republican primary, then easily won the seat that fall in his heavily Republican district.

For some Republicans, Mr. Gowdy’s predilection for picking off members of his own party has made him akin to Inspector Javert in “Les Miserables” — devoted to the law but not always to mercy. “I’m sure he has some rationale for the things he has done,” Mr. Inglis said in a phone interview.

Mr. Gowdy responded: “The graveyard is full of people waiting on open seats. I have this belief that if you are qualified and you believe that you would do a good job doing something, there is no reason you shouldn’t run.” He once vowed to retire after two terms. This summer, he officially unretired to run for a third term.

Some Democrats on the committee have longstanding relationships with Mr. Gowdy, among them Representative Elijah E. Cummings of Maryland, the committee’s ranking Democrat. Mr. Cummings went to Mr. Gowdy to seek his reassurances that there would be “no surprises” before agreeing to serve with him.

“I have a tremendous amount of respect for Gowdy,” Mr. Cummings said. “He has always treated me with the highest level of respect.”

On Wednesday, Mr. Gowdy’s committee received a classified briefing from various agencies about Ahmed Abu Khattala, the Libyan militia leader charged in connection with the killing of the four Americans in Benghazi. The committee will continue to meet this month, with public hearings weeks if not months away.

Some believe that Mr. Gowdy might take the investigation into at least one area that binds both parties.

“There is the question of what you do to bring the perp to justice,” said Matthew Miller, a former spokesman for Eric H. Holder Jr., the attorney general who once roasted under the Gowdy boiler during hearings on the botched gun-trafficking case called Operation Fast and Furious. “You would think Gowdy might respect, as a prosecutor, the need to let the government do its job.”