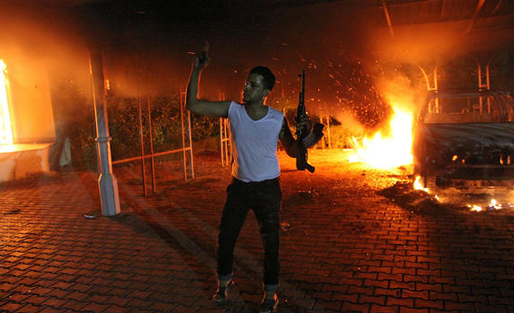 It was a searing moment in American history that showed us at our very best — and, sadly, our worst.

It was an event that will be remembered for the courageous heroism of some, and the feckless self-centeredness of others.

Two years later, like the rest of us in the nation, Patricia Smith is still waiting to learn the real story of what happened that night in the North African desert.

Two years later, I still cannot get the words of Smith’s mother out of my mind.

“Every time I see this on TV,” she told the House Oversight Committee, “I see these bloody fingerprints crawling down a wall of that Benghazi place and I ask everybody, ‘do those belong to my son?‘ and nobody has told me anything.”

“It’s been pure hell living through all this and not getting any answers.”

“I was told a few things,” she corrected herself, holding back tears. “They were all lies.”

“Obama and Hillary and Panetta and Biden and [United Nations Ambassador] Susan [Rice] all came up to me at the casket ceremony and gave me a big hug, and every one of them said it was ‘the video,’ but even then, they knew it wasn’t,” she said. “They lied to me.”

“I don’t count, the people of America don’t count,” she bemoaned, the frustration visible on her face. “The only thing that counts is themselves and their jobs. I want to know what happened to my son! Why can’t these people tell us this?”

Two years later, like the rest of us in the nation, Patricia Smith is still waiting to learn the real story of what happened that night in the North African desert.

A decorated Navy SEAL, Woods served multiple tours in Afghanistan, Iraq, the Middle East and Central America. A certified paramedic and registered nurse, he retired from the military in 2010 to care for his former comrades at the Naval Medical Center in San Diego before returning overseas — this time protecting American diplomats in Central America and, fatefully, the Middle East.

From details Congressional investigators pieced together, we know that Woods along with Doherty who rushed in from Tripoli with American reinforcements hours after the initial assault fought to protect those remaining at the compound.

Immediately encountering heavy fire from extraordinarily well-equipped attackers, Doherty and Woods took up defensive positions on the roof of the compound, each only to be killed by separate mortar attacks. Flying shrapnel from the mortars also injured a 31-year old diplomatic special agent, David Ubben.

The courage and selfless patriotism that was shown that night in Libya will forever stand in stark contrast to the 24 months of cowering, cover-ups and political posterior-covering half a world away in Washington.

What is blazingly apparent in its aftermath is that the president and his team feared the truth: a resurgent Al Qaeda had waged a protracted and well-equipped assault on a poorly defended diplomatic outpost that had killed four Americans, including the first U.S. ambassador to die in the course of duty in more than 30 years.

Had the real facts of the Benghazi assault become known at the time, it would have given lie to the administration’s false narrative of a decapitated al Qaeda and a pacified Libya. With eyes sharply focused on the Presidential election just weeks away, Obama, Hillary Clinton and their team began a campaign to dissemble.

Those who died that night on our behalf deserved better from the government they served. Two years later, so do we.

Dr. Herb London is president of the London Center for Policy Research and is co-author with Jed Babbin of “The BDS War Against Israel.”