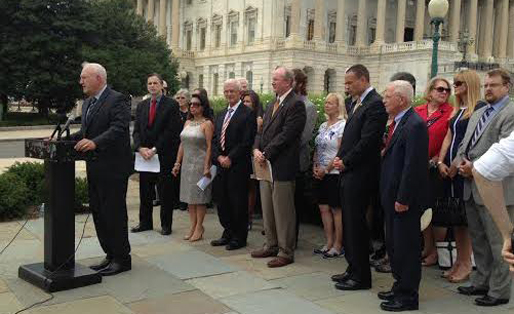 Questions about the Obama administration’s decision to let helpless Americans die in the terrorist attack on the U.S. mission in Benghazi, Libya two years ago won’t go away anytime soon.

But that won’t stop former Secretary of State Hillary Clinton, who desperately wants to be the next president, from trying to make the whole Benghazi episode that happened under her watch go away. So far the Clinton operation isn’t working.

Charles Woods, father of Navy SEAL Tyrone Woods, who died trying to fend off the Islamist attack, said he can’t understand why the Obama administration won’t answer even the most basic questions about what happened in Libya on Sept. 11, 2012.

“When a mission is compromised, the warriors, they know they will be extracted,” said Woods, who was also a Navy SEAL himself. “During all of the hours that this attack happened, there was no attempt made to rescue.”

The Obama administration’s refusal to launch such a rescue mission stands in stark contrast to its willingness to swap Bowe Bergdahl, a U.S. soldier who defected to the Taliban in Afghanistan, for five members of the terrorist high command. The White House and Secretary of State John Kerry justify the cynical Bergdahl transaction by loudly proclaiming that it is U.S. policy never to leave a man behind.

But to President Obama, it is standing policy to leave Americans to their doom when a rescue mission interferes with reelection plans. At the time of the attack, the Obama White House made a conscious, calculated decision to let American officials perish overseas, fully expecting the incurious pro-Obama media to ignore what really happened.

In the midst of a heated reelection campaign, Obama had claimed al-Qaeda was decimated and on the verge of annihilation. When it turned out the terrorist organization was doing just fine, he decided to scapegoat a YouTube video instead of admitting that al-Qaeda was roaring back, stronger than ever, under his watch.

For two weeks after the attack the Obama administration said over and over again that the incident in Benghazi was inspired by a low-quality anti-Islam video on YouTube. The American resident who made the video that virtually no one watched was jailed on the thinnest of legal pretexts after then-Secretary of State Hillary Clinton vowed to grieving relatives over the flag-draped remains of the four dead men to get the video maker she claimed caused the attacks. White House adviser Susan Rice went on TV to back up the administration’s lie that the assault was related to a video. Eventually the administration acknowledged it was a terrorist attack.

During the attack, U.S. forces were in place in nearby Sicily, an hour or so away by air, but the order to fly to Benghazi in an attempt to rescue the besieged staff at the complex never came. That order was never issued by President Obama, because he knew it would reveal his policy of appeasement towards Islamic totalitarians to be in shambles as the Middle East and North Africa fell into the hands of America’s enemies.

“We still do not have the answers we need — the truthful answers we need as to why these American heroes were left to die,” Woods said at a press conference yesterday just outside the U.S. Capitol.

The White House has been stonewalling ever since the attack started in Libya on Sept. 11, 2012, first advancing the false narrative that the assault had something to do with an anti-Islam video nobody saw. After the lie that incensed locals spontaneously came together to hit the consulate fell apart, the Obama administration has been blame-shifting furiously.

“Now some are tempted to ask, ‘What difference at this point does it make,’” Gohmert said, echoing the infamous comment uttered by then-Secretary of State Hillary Clinton as she attempted to deflect responsibility for the deaths of four Americans killed during the Benghazi attack.

“And the answer should come swift and clear anytime it’s asked, because until we know what happened, we can’t avoid the same mistakes in the future,” he said.

The Obama administration “is following the example that was learned in the Clinton years, that if you keep refusing to provide documents, keep refusing to give answers, then eventually you can get to the point where you can say that’s old news,” Gohmert said.

“And the mainstream media can sometimes be compliant and say ‘Well it is old news,’” he said. “Well, it’s not old news because we still don’t have the answers.”

Judicial Watch president Tom Fitton said internal State Department documents have surfaced that show that three months before the Benghazi attack security guards were fleeing their posts “out of fear of their safety.” Those documents consisted of emails obtained by Judicial Watch under the the Freedom of Information Act, which is “at this time, is the best way to get information out of this administration — an administration that is committed to secrecy and stonewalling on something that would have taken down previous administrations,” Fitton said. “Which is the lying by a president and his officials, to protect his reelection, about a terrorist attack that killed four Americans.”

In an exclusive interview with FrontPage magazine after the press conference, Fitton said the narrative invented by White House aide Ben Rhodes after the attack “was used to guide [Ambassador] Susan Rice in her appearances on the Sunday morning talk shows” after Sept. 11, 2012.

The Rhodes narrative was crafted to make the president look good, not to provide an honest accounting of what happened in Benghazi, Fitton said.

“But other emails also released along with the Rhodes email show as the attack was happening, the State Department, presumably Susan Rice and people around her, were getting real-time information, they were concerned about a kidnapping, there was talk of an attack, no talk of demonstrations, no talk of videos.”

“It was what it was, which was an attack,” he said. The government had intelligence at the time that someone using the ambassador’s phone, issued by the State Department security operation, who was calling from the hospital saying that Stevens was alive and well.”

If the ambassador was alive and well at the hospital, why wasn’t an attempt made to rescue him, Fitton asked rhetorically.

“That piece of information is as outrageous as anything else we found, including the Rhodes email, because it showed the State Department had intelligence the ambassador was alive and nothing was done to rescue him we now know.”

And the American people still don’t know what Chris Stevens was doing in Benghazi, helpless and far away from his home base in the capital city of Tripoli.

One plausible theory is that Stevens may have been overseeing some kind of covert Obama-authorized weapon-smuggling operation in Libya.

Like the deposed Libyan dictator Muammar Qaddafi, the ambassador was savagely sexually abused and murdered by adherents of the so-called religion of peace, according to news reports at the time that the Obama administration has not refuted.

Whether Americans will ever find out the truth while President Obama remains in power remains an open question.