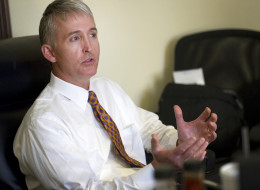 Kiko most recently served as vice chairman of the Smith-Free Group, a D.C.-based government affairs firm, and has extensive experience on Capitol Hill.

“Phil brings with him years of experience serving in various capacities in the House and the Executive Branch, including top positions for three Committees,” Gowdy said in a statement.

“He has a proven record of effective leadership and management, and I am pleased to have him on our team as we conduct a serious, fact-driven investigation to ensure our fellow Americans know the full truth about what happened in Benghazi.”

In addition to serving with the departments of Interior and Education, Kiko held various senior staff positions on the House Administration Committee, House Judiciary Committee, House Science Committee, and the office of Rep. Jim Sensenbrenner (R-Wis).

Kiko began his career in Washington at the National Republican Congressional Committee as associate legal counsel, according to a bio page on Smith-Free Group’s website. The NRCC came under fire recently for fundraising off the Benghazi attacks, a move not endorsed by Gowdy, the select committee’s chairman.

Republicans have promised a serious, fact-based investigation into the Sept. 11, 2012, attacks that will eschew politics and shine a new light on how four Americans were killed. But the appointment of a former NRCC aide is sure to enflame Democrats, who already suspect the inquiry of being nothing more than a partisan witch hunt.

“Phil Kiko is a man of unquestioned integrity with a record of distinguished service to the House and the American people,” Boehner said. “His appointment today is further proof of Chairman Gowdy’s commitment to an investigation that is serious, fact-based, and professional. The American people deserve the full truth about what happened in Benghazi on September 11, 2012, and there is no better person to help lead this effort than Phil.”

Gowdy’s move to staff up the committee comes after Rep. Darrell Issa’s (R-Calif.) announcement that he was issuing another subpoena demanding that Secretary of State John Kerry testify in a separate probe of the attacks run by the Committee On Oversight and Government Reform.

The subpoena gave more fodder to Democrats, who pointed to the two investigations as evidence the matter was turning into a “circus.”

“I do not understand what the House Republicans are doing on Benghazi, and apparently they don’t either,” said Rep. Elijah Cummings (D-Md.), the ranking member on the committee.