Up to $500 million worth of weapons intended for Libyan rebel fighters ended up in the hands of terrorists since the country’s uprising began in 2011, former senior military officials and current members of the intelligence community told TheBlaze.

Those weapons, provided to rebels with tacit approval from the United States during the 2011 Libyan civil war, ended up in the hands of Al Qaeda-linked militants and ultimately may have played a role in the deadly Benghazi attacks. 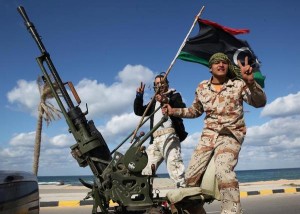 The Libyan rebels have refused to give up the arms, and bloody clashes between tribes have thrust the fragile nation into lawlessness.

At the start of the Libyan civil war, which began as part of the Arab Spring movement, the U.S. and Europe had difficulties telling friend from foe. Al Qaeda sympathizers and extremists were directly woven into the fabric of the rebel fighters, and weapons shipments coming from the Persian Gulf into Libya landed in the hands of terrorists and other non-state actors, according to a United Nations report and several U.S. officials who spoke to TheBlaze. The 2014 U.N. reportrevealed that “most arsenals continue to be controlled by non-state armed groups and governing institutions have very limited capacity to control Libya’s borders, ports and airports, which contribute to the overall insecurity in the surrounding region and within Libya.”

Further, a UN investigation in 2013 found that Qatar and the UAE breached an arms embargo on Libya during the 2011 uprising. The UN panel noted that Qatar had denied the accusation, while the United Arab Emirates failed to respond.

“Some 18 months after the end of the conflict, some of this materiel remains under the control of non-state actors within Libya and has been found in seizures of military material being trafficked out of Libya,” according to the UN investigation.

The Obama administration did little to intervene in weapons shipments from Qatar to Libyan rebels early on during the uprising and there were few U.S. boots on the ground to monitor where the shipments were being sent, basically amounting to tacit agreement, one former U.S. official said.

“If the administration didn’t want Qatar to ship weapons, they could have tried to put pressure on them, but that didn’t happen,” the official said. “Instead they turned a blind eye or chose not to get involved. The problem was that some of these weapons were landing in the hands of bad players in the region and that’s the biggest concern.”

It was shortly after the 2011 NATO military campaign started against then-Libyan dictator Moammar Gadhafi, however, that rumors began to surface that members of the rebel forces were actually linked to Al Qaeda, retired Rear Adm. Chuck  Kubic told TheBlaze. Kubic is a member of the Citizens’ Commission on Benghazi, a group comprised mainly of retired military officials and former intelligence officers aimed at discovering the truth of what happened the night of the attacks.

“Information started to surface in other media about the terrorist element that was within the rebels and about how we had to be very, very careful about who we were supporting,” said Kubic, who has spent a significant time in Libya before and after the overthrow of Gadhafi. ”Even [former NATO top commander] Adm. [James] Stavridis went before the Congress and alluded to an intelligence summary that he had received that had indications … of rebels who were actually terrorists.”

Stravridis told the Senate on March 29, 2011: “We are examining very closely the content, composition, the personalities, who are the leaders of these opposition forces … we have seen flickers in the intelligence of potential Al Qaeda, Hezbollah, we’ve seen different things.”

Kubic said that as Stravridis gave his testimony, the Obama administration in “an unbelievable series of days – the president signs a decision, directive that says we should both support and arm the Libyan rebels. Now, if I knew that these rebels were terrorists and had the links, he certainly had to know that.”

Kubic also recalled how prior to the NATO airstrikes in the country, Gadhafi “expressed his willingness to abdicate shortly after the beginning of the 2011 Libyan revolt, but the U.S. ignored his calls for a truce, which led to extensive loss of life, chaos and detrimental outcomes for U.S. national security objectives across the region.”

Only days later, NATO would attack, with the U.S. in a primary role. Kubic said that was the beginning of the chaos that would eventually lead to the deaths of Stevens, State Department information officer Sean Smith and former Navy SEALs Glen Doherty and Tyrone Woods. 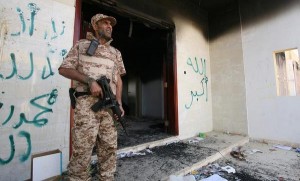 But which Al Qaeda leaders were benefiting from the chaos?

A U.S. businesswoman who had access to senior Libyan officials and provided information as a paid informant for the CIA and FBI, said she was asked to provide intelligence on various rebel leaders and their actions while she was conducting business in Libya. Speaking to TheBlaze TV’s For the Record and going only by the pseudonym Annie to protect her identity, she said the Obama administration was aware that $500 million of the $1 billion in weapons delivered in shipments from weapons dealers in the Persian Gulf were being taken by members of Al Qaeda.

Current and former U.S. officials intimately familiar with operations in Libya at the time confirmed Annie’s statement to TheBlaze.

Annie said one of the benefactors was Al Qaeda leader Ahmed Abu Khattalah, who is now wanted by the U.S. government.

“I was able to uncover in less than 24 hours of the event is that it was a terrorist attack [in Benghazi],” Annie said. “I reported not only was it a terrorist attack, it was executed by Ansar al-Sharia, and that some of the individuals involved in executing the attack had come from the rebel opposition and that this was a significant terrorist event.”

Ansar al-Sharia is one of the militia groups that emerged to fill the vacuum following Gadhafi’s fall; the Al Qaeda-tied group advocates implementing strict Shariah law across Libya.

“That was within less than 24 hours of the event occurring, and that was officially reported up through the intelligence channels,” she added.

It wasn’t until January 2014, however, that the State Department added three chapters of Ansar al-Sharia, as well as three of the groups’ leaders, to the government’s terrorist designation lists. Along with Khattalah, Ansar al-Sharia leaders Sufian Ben Qumu and Seifallah Ben Hassine were added to the list of specially designated global terrorists, according to a State Department official.

Khattalah admitted in an interview with the New York Times that he was at the annex the night of the attack, but denied having anything to do with the violence that took the lives of the Americans.

Khattalah had a deep history with Gadhafi. He had spent the majority of his adult life behind bars under the Gadhafi regime for his strict Islamic views. He “scoffed” at the U.S. in the New York Times interview saying, he would be proud to be linked to Al Qaeda’s “puritanical zeal for Islamic law.”

Annie said that Ansar al-Sharia of Libya was a deadly mix, which included the February 17 Martyrs Brigade, considered the biggest and best-armed militia in the country.  The brigade, however, was crawling with extremists and working closely with “Khattalah’s brigade” it had comprised Ansar al-Sharia in Benghazi, she added.

“So you have rebels coming from two brigades that came into existence as a result of the revolution comprising the individuals in Ansar al-Sharia in Benghazi who executed the attack of the U.S. facility and the death of the Americans,” she said.

“Why would the United States government allow any rebels to have knowledge and position on the U.S. facility of these types of sensitive security issues when some of the rebels are tied to a terrorist organization, Ansar al-Sharia, who ultimately executed the attack?” she said, before adding an explosive charge.

“I believe that explains why the rebels who executed the attack, the terrorists, were so able to know exactly where Chris Stevens was. It was an inside job.”

Originally published at the Blaze