On Sept. 11, 2011, an Armenian carrier from Albania landed in Benghazi, Libya. It was carrying 800,000 rounds of ammunition originating from Albanian surplus stocks. Three of those stocks belonged to armed forces of the United Arab Emirates, according to a 2013 United Nations investigation.

Planes from Albania, which also included weapons shipments from Ukraine, were continuing to pour into civil war-torn Libya, despite an arms embargo — and the Obama administration was well aware of what was happening, according to numerous sources who spoke to TheBlaze. 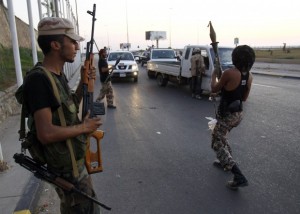 But what is the process for shipping hundreds of millions — if not billions — of dollars worth of weapons and ammunition from one country to another? And is it possible for the nation of origin to deliver those weapons covertly, leaving a “zero footprint” in the nation where the weapons are delivered too?

American arms dealers are intimately familiar with the process. In fact, the U.S. topped the list as the largest global supplier of major weapons from 2009 to 2013, according to a report issued by the Stockholm International Peace Research Institute, which conducts research on conflict, arms control and disarmament.

According to the institute, the U.S. in 2013 accounted for 45 percent of arms deliveries to Persian Gulf states, including the UAE and Qatar, and has already signed contracts that will allow it to maintain high levels of arms exports to these countries.

Wednesday’s season finale episode of TheBlaze TV’s For the Record (8 p.m. ET) will take viewers back to the night of the deadly 2012 Benghazi attacks with those who were there, and expose how Al Qaeda militants benefited from the massive weapons being delivered by the UAE and Qatar with at least tacit approval of the Obama administration.

The Purchase of Arms

A U.S. arms dealer who spoke to TheBlaze on condition of anonymity described the tedious process of getting approval for weapons transfers, and the problems that arise when the cargo is not closely monitored by intelligence or military officials on the ground. In Libya, the failure of the United States and NATO to adequately monitor the weapons being shipped by the UAE and Qatar in 2011 and 2012 gave Al Qaeda members embedded within the rebel forces an advantage and allowed others to build up their arsenals.

The arms dealer, who holds all of the appropriate licenses with the U.S. government, works in a world few have ever seen. He has traveled throughout the Middle East and South Asia, and described a world where arms dealers negotiate for the best and biggest bulk of weapons supplies. Everything is done with the knowledge of those in the “need to know” at State Department.

The weapons dealer said the first step is asking “the State Department under your license for a prior approval or request.” The dealer then gets the “end-user certificate,” he said, which comes from the country where the weapons are being shipped to and is used in international transfers and sales to certify that the buyer is the final recipient of the materials. It also prevents the transfer of weapons to another party. In Afghanistan, for example, either the minister of defense or the minister of interior would provide the end-user statement.

Then the haggling begins.

End-user certificate in hand, the weapons dealer begins getting bids, traveling to nations like Bulgaria, the Czech Republic, Serbia and Ukraine — wherever a warehouse of weapons might be located — and bids on those weapons against other arms dealers from around the world.

“They would not even talk with you unless you had that end-user certificate,” the dealer said.

Once the end-user certificate is signed, it’s back to the client, who’s providing the weapons to their destination nation — usually a U.S. government agency. The “client will then turn around and issue a contract and then wire funds.”

“Then you can start procuring,” the arms dealer said, referring to the actual purchase and selection of weapons.

Before the process is complete, the prior approval request that had been to the end-user gets staffed out to at least five agencies, four within the State Department and one with the Department of Defense, for approval.

Once the authorization is complete, the process repeats itself “to some extent” so there are a number of checks and balances, he said. The export committee in the country where the arms are being purchased from will ask the dealer for the approval documentation already submitted to the State Department and for the end-user agreement.

“If you’re procuring within Bulgaria … under NATO regulations there’s a confirmation process with the State Department,” the dealer said. “So the Bulgarian export committee would then contact the U.S. Defense attache and ask, ‘is this a confirmed transaction? Can [this person] send this equipment to Kabul?’ And they will reply back and this memo will get back to the export committee, ‘yes it’s approved.’ OK, now then an export license is issued.”

After the approvals have taken place, the weapons dealer can begin organizing their logistics and transportation.

It’s usually done on a “free-carrier” basis — you “pick up your equipment at the airport which is already cleared by customs, and then you begin to ship,” he said.

And when it gets to the other end, there are more checks and balances, in the form of a delivery verification certificate.

“The end user within that country then signs off on that statement, and … they’re clear to take that equipment to the warehouse where it would be going,” the dealer said.

Because of all these steps it would  ”virtually impossible” for the U.S. government to be unaware of any transaction, he said.

There is a way for countries to bypass the legal weapons transactions, he said. It is extremely risky. 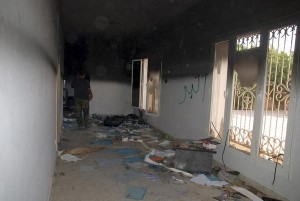 This Sept. 12, 2012 file photo shows a man walking through a room in the gutted U.S. facility in Benghazi, Libya, after the attack that killed Ambassador Christopher Stevens and three other Americans. (AP/Ibrahim Alaguri, File)

The nation can outsource the weapons purchase “to a foreign ally to handle three components: procurement, transportation and logistics.”

But “even that part is not 100 percent untraceable, but it’s a good step if you want to eliminate all U.S. involvement,” he said.

The Obama administration “had to have been aware” and at least tacitly allowed Qatar and the UAE to procure and ship weapons to Libya, he said.

“The consequences are that you lose immediate control over the end-user, and you allow them to handle your logistics and transportation so that it prevents you from identifying who this equipment is going to fall into,” the arms dealer said. “So if you don’t put your protocols in place and you don’t deliver it to vetted sources that equipment could end up anywhere, and it’s your name on it, it’s gonna be on the end-user statement if it gets re-transferred to the wrong personnel.”

Some of those end users ended up being Al Qaeda and extremist militants.

But having the UAE and Qatar ship the weapons “gives the U.S. government plausible deniability.”

Originally published at the Blaze