A U.S. businesswoman and paid CIA and FBI informant in Libya who said she was a good friend of Ambassador Christopher Stevens’ told TheBlaze the Obama administration knew that weapons and aid were ending up in the hands of Al Qaeda-affiliated militants in the country before the deadly Benghazi attacks.

The informant, going by the pseudonym “Annie” to protect her identity, said she met with Stevens on numerous occasions during her time in Libya and gathered information for the CIA and FBI on rebel leaders and terrorist organizations operating inside the country.

Annie told TheBlaze TV’s For the Record that there was “a disconnect between senior elected officials [and] Obama” as to the reality on the ground in Libya. The rebels were nothing more than terrorists backed by members of the Muslim Brotherhood; the fact that the administration was “very aggressive in promoting support for the rebels” was perplexing, she said.

In an example of that “disconnect,” the State Department received multiple warnings not to hire the British security firm tasked with protecting the U.S. ambassador in Libya, just as anti-U.S. sentiment within rebel factions became an imminent danger known to Obama administration officials who did little to protect Americans working in the region, TheBlaze has learned.

Emails and documents obtained by conservative government watchdog Judicial Watch show that such warnings about security firm Blue Mountain Group were ignored, even though Libya reeled with chaos following the 2011 death of dictator Moammar Gadhafi. 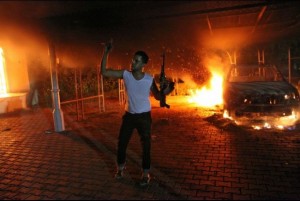 The Blue Mountain Group was the company providing security the night of the Sept. 11, 2012 terrorist attacks on the American diplomatic outpost and CIA annex in which Stevens, two former Navy SEALs-turned-CIA contractors, and a State Department information management officer lost their lives. The firm had already lost two previous security contracts in Tripoli for failing to meet standards, according to documents obtained by Judicial Watch in response to a February 2013 Freedom of Information Act request.

A June 7, 2012 email revealed that Jairo Saravia, the State Department’s acting regional security officer in Tripoli, warned that the Blue Mountain Group did not have a good record and had had several contracts with large companies canceled. Saravia warned the State Department to discontinue their services.

“Just a quick note in regards to Blue Mountain,” Saravia told State Department regional security officer David Oliveira in an email. “The company has lost several security contracts here in Tripoli, including the Corinthian Hotel and Palm City complex. The latest information is Blue Mountain is not licensed by the [government of Libya] to provide security services in Libya. I would advise not to use their services to provide security for any of our annexes and/or offices due to the sensitivity this issue has with the current [government of Libya].”

In another email sent the same day as Saravia’s, regional security officer Greg Levin said that the firm “did not have a licensing problem, but did not refute that it had lost several security contracts in Tripoli.”

In June 2012, three months before the Benghazi assault, British Ambassador Dominic Asquith’s convoy was attacked by militants, but State Department officials did not take increased measures in lieu of the growing threats and the British firm continued to be the primary security for the U.S. diplomats and contractors. Asquith was not harmed in the attack, but three members of his security team were injured.

Additional emails between State Department officials in Libya also revealed that the department was aware of the problems they were having with licensing for security firms in Libya.

“We have got to get legal to change how licensing is done for contractors,” one of the emails stated.

Zoe Thomas, personal assistant to Blue Mountain Group’s CEO Nigel Thomas, told TheBlaze that the company did not have any comment regarding the State Department email exchanges.

Gerlach also referred to Levin’s email on June 7, which suggested it didn’t “appear that [Blue Mountain] has a licensing problem.”

The Blue Mountain Group’s website touts itself as being “made up of the most exceptional security professionals, often with Special Forces backgrounds, each bringing operational expertise to focus on your security needs.” According to news reports, the firm has operated in Pakistan, Libya, Afghanistan and other areas throughout the globe.

Like many overseas security firms, they hire trained locals to be a part of their security detail. In Libya, the company hired roughly 20 Libyan guards that were minimally trained, according to several investigations by Reuters. Some of the guards who sustained injuries during the attack on the Benghazi annex told the news agency they were’t trained to protect themselves against the heavily armed terrorists.

“Benghazi is like the Wild West and the situation has become one of complete chaos after the death of [Gadhafi],” a private security contractor told TheBlaze, speaking on condition of anonymity because of their ongoing work in Libya. “It was apparent from everyone on the ground in Libya the night Stevens was killed that this was the work of Al Qaeda. The fact that the State Department hired Blue Mountain to do security shows their complete incompetence and failure provide their own people with the best security and trust the instincts of the people on on the ground in these volatile countries.” 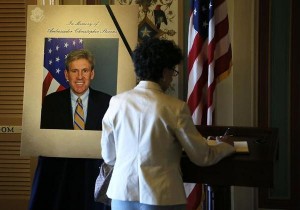 Stevens’ death is only one part of the mystery regarding the Obama administration that still hides in the ashes of Benghazi. Wednesday’s new episode of For the Record (8 p.m. ET) will reveal the darkest secrets from those who were working inside Libya during the attacks and who watched the situation deteriorate even further after the ambassador was killed. For the Record’sinvestigation reveals the possible motives that led senior administration officials to cover up the circumstances surrounding Stevens and how the Libyan rebel groups were infiltrated by Al Qaeda from the beginning of the uprising.

The documents obtained by Judicial Watch reveal the situation with Blue Mountain Group was unraveling in Benghazi as early as April 2012. A partially redacted email describes that there was almost a physical altercation between a Blue Mountain supervisor with a member of the Libyan 17th of February Martyrs Brigade. It is the Libyan militia that was supposed to provide security at the Benghazi compound the day of the attacks.

“At 1130 hours, a verbal altercation occurred between the Libyan February 17th Martyrs Brigade team member and Mr.[REDACTED]. The team member then notified the brigade team leader of the incident, who then went to the gate to speak with [REDACTED]. At that time, a second verbal altercation occurred between the three and [REDACTED] left the compound. The team leader then came to the [Regional Security Officer’s] office and reported the incident,” said an April 18, 2012 email from State Department Assistant Regional Security Officer Teresa Crowningshield to Director of Security Program Manager Norm Floyd.

Crowningshield went on to say the “team leader stated that [REDACTED] made an inappropriate comment with reference to [Gadhafi.] Then when the team leader came to speak with [REDACTED] he made derogatory comments regarding the team leader’s mother. As the situation escalated to the point of a likely physical confrontation, [REDACTED] left the compound.”

State Department spokeswoman Victoria Nuland originally denied that Blue Mountain Group was contracted by the U.S. government when reporters questioned her about it in 2012. It was later revealed that the small security firm was paid roughly $783,000 from the State Department for protecting the consulate in Libya. State Department officials said the decision to hire the security company was based on expediency and there was no guarantee how long diplomats would remain in the politically unstable country.

Originally posted at the Blaze