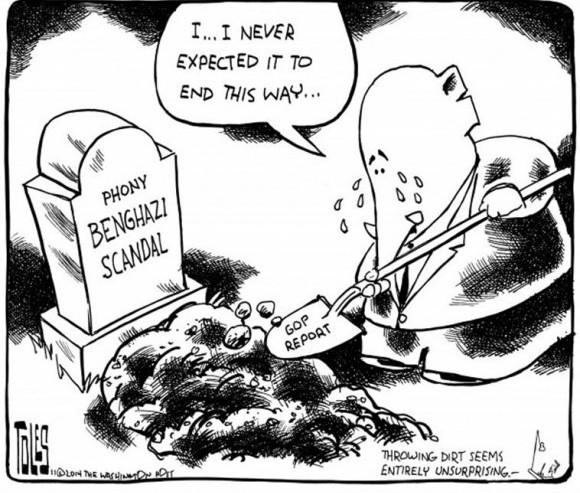 By ROGER ARONOFF  |  ACCURACY IN MEDIA  |

The Washington Post, like The New York Times, is intent on declaring the Benghazi scandal dead and buried, as suggested in this recent cartoon, and in this more recent editorial. The latest item these papers are hoping will provide the final stamp on the story is a recent report issued by the House Permanent Select Committee on Intelligence.

In December of last year, David Kirkpatrick of The New York Times fallaciously cast doubt on the idea that al Qaeda perpetrated the 2012 Benghazi, Libya attacks. Similarly, the Post’s latest Benghazi editorial, published on November 29th, piles absurdity upon absurdity. The authors acknowledge that “The [House Intel Committee] confirms that diplomatic security at the Benghazi mission was ill-prepared and that the agents knew they could not defend the compound from an attack. The panel also criticizes the CIA’s ‘flawed’ handling of talking points that contributed to possibly incorrect statements Sept. 16, 2012, by Susan Rice, then U.S. ambassador to the United Nations.”

They have thus acknowledged two of the scandals surrounding Benghazi, yet simultaneously condemn them as “conspiracy theories.” The U.S. government failed to provide security for an American ambassador in one of the most dangerous locations in the world, except for security provided by the February 17th Martyr’s Brigade, a radical jihadist group. And the CIA’s “flawed” handling of talking points was part of a clear attempt to cover up and deceive the American people about what had actually happened in Benghazi that year.

The editorial also states, “‘There was neither a stand down order nor a denial of available air support, and no American was left behind,’ the panel concluded.” They continue, “The panel found that there was ‘no evidence of an intelligence failure’ prior to the attack—the CIA did not have tactical warning that it was imminent.”

Clare Lopez, a former CIA officer and a member of the Citizens’ Commission on Benghazi (CCB) debunked those two findings in a recent article for Accuracy in Media, “Debunking the House Intelligence Report on Benghazi.” Evidence provided by the Annex Security Team refutes assertions that there was no stand down order given. Lopez also provides convincing evidence that there was indeed, an intelligence failure to anticipate the attacks that occurred in Benghazi.

And as to whether there was “a denial of available air support”—of course there was. The series of battles in Benghazi lasted for a full 13 hours, but former Defense Secretary Leon Panetta claimed before Congress that “frankly without an adequate warning, there was not enough time given the speed of the attack for armed military assets to respond.” How, for example, could the Pentagon know when these attacks were actually going to end? “At our military base in Sigonella, Sicily, which is slightly over 400 miles from Benghazi, we had a fully equipped Special Forces unit with both transport and jet strike aircraft prepositioned,”wrote CCB member Admiral James “Ace” Lyons (Ret.) back in 2012.

One of the tragedies in terms of air support is that the assets at Aviano Air Base in Italy were in a training posture on September 11, 2012. But General Carter Ham (Ret.) has testified that, regardless of the status of assets, he thought that close air support was the wrong military tool for the job. What was the appropriate military response, then?

The Post editorial argues that “The big mistake in Libya policy, the consequences of which are more apparent today than ever, was President Obama’s refusal to support the new government’s attempt to build security after he helped topple the nation’s longtime dictator.” As our Citizens’ Commission on Benghazi argued in our April 2014 Interim Report, the big “mistake” in Libya policy was switching sides in the War on Terror. It involved engaging in an unnecessary war to topple Muammar Qaddafi—even though he had given up his weapons of mass destruction, was fighting al-Qaeda, and offered to abdicate under a white flag of truce. Instead, we knowingly armed al-Qaeda and al-Qaeda related groups in order to enable them to defeat Qaddafi, and are paying the price to this day. The other big “mistake” was the dereliction of duty—the failure to attempt to rescue our warriors who were left to die in Benghazi. You can read that report here.

Reliable sources have told us that other than Rep. Mike Rogers (R-MI), the chairman of the House Permanent Select Committee on Intelligence—who is voluntarily leaving Congress to become a radio talk-show host—none of the Republicans on the committee agreed with these findings, or were even given adequate time to review them.