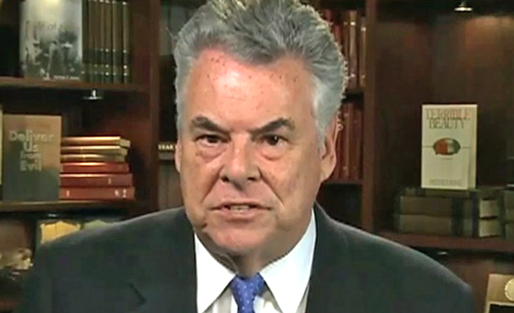 Newly declassified testimony shows at least five Republican lawmakers on the House Intelligence Committee suggested former CIA Director David Petraeus provided bad information, or even misled them, after the 2012 Benghazi attack when he blamed an obscure Internet video and downplayed the significance of mortar attacks that night.

The testimony comes from a Nov. 15, 2012, closed, classified session. The committee heard testimony from the nation’s most senior intelligence officer, James Clapper; then-head of the National Counterterrorism Center Matt Olsen; Under Secretary of State Patrick Kennedy; and then-acting CIA Director Michael Morell, who stepped in after Petraeus resigned, citing an extramarital affair.

The testimony shows lawmakers, including the chairman, recalling how Petraeus stressed protests over an anti-Islam video as the impetus — an explanation that would later unravel — while brushing off concerns that mortar attacks indicated a planned terror attack.

During that testimony, Rep. Mac Thornberry, R-Texas, who takes the gavel of the House Armed Services Committee in January, said: “Mr. Morell, my strongest memory [was] Director Petraeus on the Friday after this event coming in and telling us this was all a spontaneous demonstration caused by a video.”

In the same session, Rep. Peter King, R-N.Y., went further, saying Petraeus was “definitive” in his assessment the video was to blame, and unlike the intelligence community witnesses present, the general did not talk about “shifts in the line of analysis.”

King said, “the 90 percent conclusion that General Petraeus reached was that this was caused by the video, and it was a spontaneous demonstration.” King continued, “the one thing he was ruling out was terrorist involvement. I remember when the chairman [Mike Rogers] specifically mentioned to him about the mortar rounds, three mortar rounds landing at the Annex, could that be an indication of terrorist involvement. [Petraeus] said no. He said anybody in Libya could do that.”

The House committee report — while having been criticized by other GOP lawmakers as incomplete — nevertheless provides new detail and images of the precision mortar strike at the CIA base known as the annex. Three on-target rounds, fired over 69 seconds, killed former Navy SEALs Tyrone Woods and Glen Doherty who were defending the annex from its roof.

Kris Paronto, one of the CIA contractors who witnessed the attacks, said: “It’s highly, if not 99.99 percent unlikely, that somebody just threw up a mortar tube and drop some mortars in and hit, hit, hit the compound. It’s, it’s not possible.”

John Tiegen, who was also part of the CIA security team, and wrote, “13 Hours: the Inside Account of What Really Happened in Benghazi,” with his fellow contractors, said it is beyond belief a four-star general would make such a basic mistake.

“I’d like to see him grab a mortar tube and launch it and get it within a 2,000 square-foot building in five shots,” Tiegen added.

The House Intelligence Committee report states the mortar team likely used a spotter to calibrate the shots, more evidence of pre-meditation and planning. The mortar strike was the third wave of the attack which began at 9:40 p.m. at the State Department consulate.

And while Morell, along with other unnamed CIA officers in the transcript, defended Petraeus, saying his talking points from the agency included the identification of the Al Qaeda-linked terror group Ansar al-Sharia, Rogers said the general went off-script.

“I want to be clear that our notes do not reflect that he said that. What you were talking about for the record was his talking points,” Rogers said. Rogers was the first lawmaker on Capitol Hill to publicly call Benghazi a coordinated, military commando-style assault, in an interview with Fox News on Sept. 12, 2012.

Democrats on the committee, including the ranking member Dutch Ruppersberger, were less critical of Petraeus. “My recollection was that Petraeus, when I walked way, he basically said that he felt that his opinion at that time it was kind of an attack based on what happened with respect to the video. But he did give caveats … that [it] could change, and it evolved,” Ruppersberger said.

Unlike the November 2012 testimony — when lawmakers did not know that Morell made key edits to the talking points — by May 2013, during a second round of classified testimony, email traffic showed Morell had been at the heart of the process, cutting some 50 percent of the text.

Significantly, during the May testimony, Morell distanced the agency from the video explanation. Morell said “the CIA never [said] that what happened in Benghazi was a result of the film.”

If the lawmakers’ recollection is accurate, that means Petraeus’ brief on Sept. 14, 2012, was instead in line with the White House, and then-Secretary Hillary Clinton’s State Department. It was a State Department press release at 10:07 p.m. ET, before the attack was even over, that first made the link to the obscure anti-Islam video. The newly declassified testimony says $70,000 was spent on advertising in Pakistan, denouncing the anti-Muslim film.

During this testimony, GOP Rep. Jeff Miller questioned Petraeus’ original testimony, stating the former CIA director “even went so far as to say that it had been put into Arabic language and then was put on this TV station, this cleric’s TV station. I mean, [Petraeus] drove that in pretty hard when he was in here. ”

Rep. Michele Bachmann, R-Minn., added “it was said in here a little bit earlier that the CIA never said Benghazi was part of a Cairo protest and of the video. And we were given just the opposite message by the Director of the CIA on the [September] 14th [2012.]”

Rogers noted there was no transcript for the brief, only staff notes, but after the Petraeus incident in September 2012, the practice was changed to always run a transcript on the briefings. The Sept. 14, 2012, brief was a coffee meeting with members.

Fox News was first to report in April that an FBI investigation into the general had been left open, after classified information was reportedly mishandled. This week, after additional reporting by Bloomberg News, Republican Sen. John McCain questioned the decision in a letter to Attorney General Eric Holder, suggesting politics may be at play.

“The fact that you and others within your Department have weighed-in publicly on the case raises questions about whether this investigation is being handled in a fundamentally fair and appropriate manner,” he wrote.

The FBI investigation into Petraeus began as early as late spring 2012, which means he was under investigation when the Benghazi attack unfolded. Facing the implication that knowledge of the investigation might have influenced Petraeus’ or Morell’s actions during the Benghazi aftermath, Morell testified he did not know what was going on with the general until the day before he resigned.

Petraeus has not spoken formally to the media about the scandal and was in the news when a new biography of Hillary Clinton was released in February, called “HRC.” It quoted the former CIA director regarding her handling of Benghazi.

“She’d make a tremendous president,” Petraeus told the authors of “HRC.” “Like a lot of great leaders, her most impressive qualities were most visible during tough times. … In the wake of the Benghazi attacks, for example, she was extraordinarily resolute, determined and controlled.”

Jack Keane, a retired four-star Army general and Fox News analyst, was a mentor to Petraeus and defended him. “David believed he was providing the best available information to the committee from the CIA analysts, which included identifying the terrorist organization, Ansar al-Sharia, and that it was terrorism. The motivation was harder to identify, and initial CIA reporting about the video turned out to be wrong within a matter of days,” he said.

Catherine Herridge is an award-winning Chief Intelligence correspondent for FOX News Channel (FNC) based in Washington, D.C. She covers intelligence, the Justice Department and the Department of Homeland Security. Herridge joined FNC in 1996 as a London-based correspondent.  Article originally posted on FOXNEWS.COM.