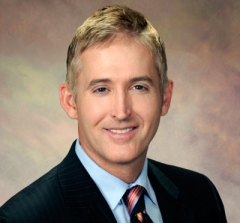 WASHINGTON — House Speaker John Boehner on Monday chose Rep. Trey Gowdy, a South Carolina Republican and former federal prosecutor, to head a special committee that will investigate the deadly September 2012 attack on the U.S. mission in Benghazi, Libya, and the Obama administration’s response.

Gowdy has been an outspoken critic of how President Barack Obama and his top aides handled the fallout from the assault, which resulted in the deaths of Ambassador Christopher Stevens and three other Americans, on the 11th anniversary of the 9/11 attacks.

During one of several congressional hearings since the attack, Gowdy ticked off a series of alleged misrepresentations by the Obama administration before yelling, “I want to know why we were lied to!”

On Monday, Gowdy praised Boehner for setting up the panel and said he was honored to lead it.

“Twenty months after the Benghazi attacks, there remain unresolved questions about why the security was inadequate, our response during the siege itself and our government’s interaction with the public after the attack,” Gowdy said in a statement. “All of those lines of inquiry are legitimate and should be apolitical. Facts are neither red nor blue.”

Democrats criticized the inquiry as a partisan stunt.

“We think this is a political, not a substantive, effort,” House Minority Whip Steny Hoyer of Maryland told reporters Monday.

Many Democratic leaders have said the Republicans’ relentless focus on the Benghazi tragedy is aimed at weakening Hillary Clinton, who was secretary of state when the attack occurred and is leading in early presidential polls for the 2016 election. The former senator and first lady has not said whether she will be a candidate.

Boehner, an Ohio Republican, said he was compelled to set up the special committee because of last week’s “revelation that the Obama administration had withheld (certain) documents from a congressional subpoena” in an earlier Republican probe.

At issue is a Sept. 14, 2012, email — three days after the attack — obtained in a Freedom of Information Act lawsuit by a conservative watchdog group, Judicial Watch, from Deputy National Security Adviser Ben Rhodes to then-U.N. Ambassador Susan Rice.

Rhodes advised Rice, who was slated to appear on several nationally televised news show, to “underscore that these protests are rooted in an Internet video, and not a broader policy statement.” Rice, now the White House national security adviser, said the attacks resulted from a spontaneous protest ignited by a demonstration at the American Embassy in Cairo against an anti-Islam video on YouTube.

“With four of our countrymen killed at the hands of terrorists, the American people want answers,” Boehner said in a statement. “Trey Gowdy is as dogged, focused and serious-minded as they come. His background as a federal prosecutor and his zeal for the truth make him the ideal person to lead this panel.”

As recently as four weeks ago, however, Boehner said a special committee was not needed because four House of Representatives panels already were investigating the Benghazi affair.

Carney said Congress has launched seven Benghazi investigations that have produced 13 hearings, 15 briefings of lawmakers or their aides and over 25,000 pages of documents.

“The facts of yesterday are the facts today, and they will be the facts no matter how often or for how long Republicans engage in highly partisan efforts to politicize what was a tragedy,” Carney told reporters.

Sen. Lindsey Graham, a fellow South Carolina Republican who has accused Obama of covering up the truth in Benghazi, praised Gowdy’s selection to head the special panel.

“Trey Gowdy is the most capable person in the entire Congress to lead the select committee,” Graham said in a statement. “He’s a former prosecutor who is well-respected by his colleagues, tenacious in his approach to his duties, and fair-minded about his responsibilities.”

Gowdy, 49, first attracted national attention in July 2011 when, six months into office, he was among a small number of House Republicans who voted against every compromise Boehner negotiated with Obama to raise the federal debt ceiling.

Gowdy cast several contradictory votes on Libya during his first year in the House.

In a June 24, 2011, House vote, he broke with most other Republicans and joined a majority of Democrats in defeating a bill that would have blocked funding of U.S. military action in Libya.

In a separate 2011 vote, Gowdy supported a congressional resolution that authorized U.S. and NATO forces to launch airstrikes in Libya during the uprising against dictator Moammar Gadhafi. Subsequent U.S.-led NATO bombing helped rebels depose Gadhafi, who was captured and killed Oct. 20, 2011, by his opponents.

Yet four months earlier, in June 2011, Gowdy voted to block sending to Libya any U.S. ground troops, which could have helped secure the country after Gadhafi fell. Before the assault in Benghazi, House Republicans had passed a series of budgets that slashed funding for security at U.S. embassies around the globe.

In the almost three years since Gadhafi’s death, Libya has been wracked by increased instability as radical Islamists, secularists and violent insurgents battle for control of the country.

In the weeks leading up to the attack on the U.S. special mission and CIA annex in Benghazi, a Libyan-based Islamist terror group, Ansar al Shariah, expanded its hold on eastern Libya. Many Libyans blamed Ansar al Shariah for the attack that led to the death of Stevens, who spoke Arabic, had deep experience in the Middle East and engaged with Benghazi residents while walking the city’s streets before his death.

On the day after the deadly assault, Ansar al Shariah suggested that some of its members had participated but denied having ordered the attack.

Within days of Stevens’ murder, enraged Libyans forced Ansar al Shariah militants to flee the region. But members and supporters, emboldened that they have escaped U.S. arrest over the Benghazi attack, have trickled back in. The group now controls huge swaths of eastern Libya, including Benghazi, making it unwelcome terrain for the U.S.-backed government in the capital of Tripoli.

Many of the 70 people suspected of having participated in the consulate attack operate freely in Libya, with the central government police and military forces too weak to take on insurgent groups that protect them.