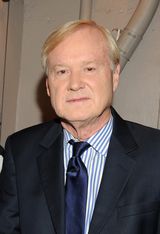 NBC’s “Hardball” host Chris Matthews used Thursday night’s airing to give Hillary Clinton a new defense for what happened during the Sept. 11, 2012, terrorist attack in Benghazi, Libya: “Sometimes you get killed.”

Speaking to a panel of guests, the host said that the former Secretary of State has to “face reality today.” He then cited a poll that found 52 percent of independent voters are in favor of further investigations into the terrorist attack that killed U.S. Ambassador J. Christopher Stevens and three other Americans.

Mr. Matthews said he wasn’t sure if Mrs. Clinton could “dismiss” or “belittle” those who ask questions about the incident, but that he wished someone would say in her defense: “Damn it, it’s the real dangerous world out there,” NewsBusters reported Wednesday.

He then said that someone needs to make the case in her defense that “you got to get out there and take risks and sometimes you get killed. And that’s part of the business. And just be tough and talking to people about the real world.”

Rep. Trey Gowdy, South Carolina Republican, has been tapped by House Speaker John Boehner to chair a special select committee to investigate the attack on the U.S. diplomatic outpost.