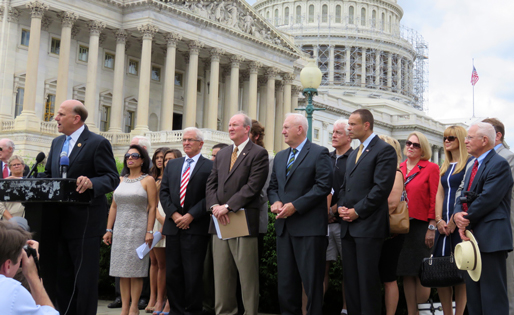 (WASHINGTON, DC) – The Benghazi Accountability Coalition marked the second anniversary of the terrorist attacks in Benghazi, Libya with a press conference in front of the U.S. Capitol that highlighted the numerous questions that remain unanswered, challenged the Obama Administration to declassify voluminous Benghazi-related materials that remain sealed or redacted, and honored those who perished in the Benghazi terrorist attack in 2012 as well as the victims of 9/11 in 2001.

While it obviously remains necessary to protect methods and sources of information, and to protect American agents serving in dangerous places who put their lives on the line for our national security, the government – despite President Obama’s stated commitment to transparency – too often uses its power to classify documents as a shroud to conceal derelictions of duty and political embarrassment. Secrecy and over-classification should not get in the way of discovering why four Americans, including a United States Ambassador, died in Benghazi on the anniversary of 9/11.

Organization leaders, Members of Congress, special guests, and family members of those who died in Benghazi participated in the press conference. Featured speakers included: