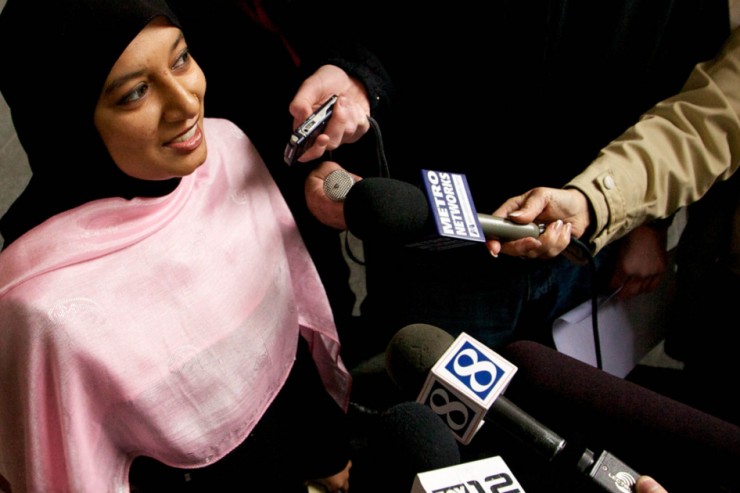 During a recent Heritage Foundation event on Benghazi’s unanswered questions, Brigitte Gabriel, President of Act! for America, proclaimed that the peaceful majority have been irrelevant to history’s outcome when tyrannists have had the power and motivation to destroy freedom. But a Muslim audience member whose question prompted Brigitte’s comments, insists she’s not irrelevant.

On June 16, 2014, The Benghazi Accountability Coalition, spearheaded by Ginni Thomas, held a half-day seminar with a series of speakers to raise issues regarding unanswered questions about the circumstances surrounding the deaths of four American patriots at Benghazi.

Brigitte Gabriel was one of three speakers on the first panel. During Q&A, a hijabbed Muslim woman standing in back of a packed audience complained, “Salam Alechim, peace to you all. We portray Islam and all Muslims as bad, but there are 1.8 billion followers of Islam. We have 8 million plus Muslim Americans in this country and I don’t see them represented here.” She asked how the jihadist ideology can be fought with weapons and stressed the need to bring Muslims to the table in order to solve the problem.

After one panelist asserted that nobody on the panel thinks all Muslims are the problem, Brigitte responded to the question. She noted in her emphatic and dynamic voice how interesting it was that the panel had not discussed Islam or Muslims, but the murder of those at Benghazi and yet the questioner asked about Islam out of context. “Of course not all [Muslims] are radical, but it’s 15 – 25% according to all the world’s intelligence, which equals 180 – 300 million people dedicated to the destruction of western civilization.” Brigitte went on to explain that we should worry about the radicals because it is they who kill, behead and massacre. Throughout history it was the radicals that drove the agenda and “the peaceful majority were irrelevant”. This was true in Nazi Germany, Communist Russia, China, and pre-World War II Japan. Additionally, on September 11, 2001, it took only 19 hijackers out of 2.3 million Arab Muslims living in the U.S. to bring America to its knees and kill almost 3000 Americans. “I’m glad you are here” Brigitte said, “but where are the others speaking out?”

Additionally, Brigitte pointed out that instead of showing concern about Benghazi, the questioner took the limelight to make a point about peaceful, moderate Muslims. “It is time we take political correctness and throw it in the garbage where it belongs!” The woman replied “as a peaceful American Muslim, I would like to think I’m not that irrelevant.” Moderator Chris Plante, jokingly asked “[W]ho is head of the Muslim peace movement?” to which the woman replied “I guess it’s me right now” and the audience applauded.

So who is was the Muslim woman in the audience and is she irrelevant?

As it turns out, the woman’s name is Saba Ahmed and she was not just some innocuous audience member who happened to show up at a Heritage Foundation event.

Saba was born in Pakistan and moved to Portland Oregon at age 12. She has numerous academic degrees and a particular interest in protecting the Islamic Ummah from America’s “useless wars.” She feels so passionately about this that while in Portland, she became very active in Democrat politics for years, even making an unsuccessful bid for congress in 2012. As a candidate, her priority was to bring home all American troops and cut military spending. “There is no need for them to be in foreign countries”… “Drone attacks in Pakistan and Afghanistan are hurting our long term national security and will come back to haunt us.”

After obtaining less than ½ percent of the vote, Saba switched her registration to Republican. But her ideology hadn’t changed. She marched in Occupy Portland, which had a large anti-Israel component, and was a featured speaker. She argued that the Muslim world hates America and therefore America should change her policies. She explained that Muslims in foreign countries are suffering as a result of U.S. policies and don’t have a voice. “We are their voice here in the United States”, she proclaimed.

Despite claiming to be Republican, she was banned from the Oregon Tea Party and the Washington County Republicans, not for her “Islamic views” as she claims, but for false accusations of death threats.

Saba made an appearance at Glenn Beck’s 9/12 meeting in Oregon, and while clinging onto a Koran, proclaimed that her faith is all she has. In TV interviews with Sean Hannity and others, she refuses to denounce any portion of Sharia law, arguing instead that “there are good and bad things everywhere.” She dodges, deflects and avoids addressing the human rights violations and tyranny committed in the name of Islam. When she’s unable to duck a question, she always has an excuse. Hannity, for example, asked Saba if she would denounce the law in Saudi Arabia that disallows women outside the home without being accompanied by a male relative. Saba replied, “I wouldn’t feel comfortable going outside alone in parts of Afghanistan. I wouldn’t want to.” Yet, she whines that, “especially in America, it’s a very harsh environment [for Muslims] due to the bias.”

Not surprisingly, Saba denies the right of Israel to have its current boundaries and argues that the boundaries for Israel after 1948 have caused “division among people all around the world.” And in an interview, when confronted with the fact that there’s nothing in Christianity comparable to Islamic terrorism, she replied, “[T]he United States Military and CIA are the most well-funded Christian organizations that regularly conduct crimes against humanity all around the world. Currently we are killing and murdering people in Libya, Syria, Yemen, Palestine, Afghanistan, Pakistan, Iraq. etc. with our drones, missiles, bombs, etc. What is the practical difference between a soldier who kills and an Al-Qaida operative the kills??? Both in God’s eyes are taking sacred life…”

Yet, as someone who insists she is against all killing, Saba still has ties to Mohamed Mohamud, a Somali born Islamic terrorist who attempted to bomb a Christmas tree lighting in Portland, Oregon in 2010. She even showed up at his trial to provide him support. When a mosque was torched in response to the bomb attempt, Saba blamed the U.S. government for “inciting violence” and warned, “[W]e will take very serious action – politically and legally – against the government for this.”

It’s no wonder coming from a woman who has attended CAIR’s Iftar dinner and was a member of the Islamic Society of Greater Portland (an outgrowth of ISNA). Both CAIR and ISNA are Muslim Brotherhood affiliates, whose mission is to destroy western civilization from within. They were also unindicted co-conspirators in the largest terror financing trial in the history of the United States.

Saba claims that she was Co-Chair of the Oregon Muslims Citizens Alliance, which, if it exists, has no website and appears to have had no activities except one “cancelled” event, which research confirms was never planned to begin with.

Saba has interned for Democratic politicians including Governor Ted Kulongoski, Senator Leahy and Representative Earl Blumenauer. She currently has an LLC or at least a website which appears to represent an LLC. According to blogger Ernest Dell, originally the website indicated that Saba Ahmed, LLC represented a global investment and intellectual property research service, with its corporate office in Portland, Oregon and its research center in New Delhi, India. The site stated that the company had a high end financial research team comprised of experts on a variety of asset classes, and provided services to investment banks, equity firms, asset management firms, financial advisory firms, and additionally had an “intellectual property team” that serviced law firms, in intellectual property firms, in-house IP corporate counsels.

Now Saba states that her LLC is a firm from which she lobbies Congress to stop all wars, claiming “expertise” in national security matters, despite any objective training or experience. The current site indicates no employees other than Saba and lists no clients. And despite her Republican registration, she is seeking a political appointment with the Obama Administration. Though insisting that she’s in “discussions” toward this end, there is no evidence that the interest is mutual or that it is anything more than Saba expressing her self-aggrandizing desire to land a plumb political position.

Brigitte Gabriel never denounced the peaceful majority of any country when she asserted their irrelevance. Clearly, what she meant is that the focus needs to be on the problem. And the problem is always the radical minority who may have less numbers, but has the power to undermine freedom and security.

Saba appears to be worming her way into politics, not to represent Americans or U.S. interests, but to represent the Muslim world. She says she doesn’t want to be irrelevant, but given her pro-Sharia apologetics and her advocacy for peace at the cost of freedom, let’s hope that she is.

Deborah Weiss, Esq. is a regular contributor to FrontPage Magazine and the Washington Times. She is a contributing author to “Saudi Arabia and the Global Islamic Terrorist Network” and the primary writer and researcher for “Council on American Islamic Relations: Its Use of Lawfare and Intimidation.” You can find more of her articles on www.vigilancenow.org.