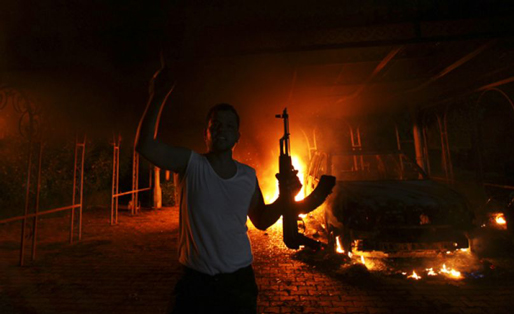 Sept. 11, 2012: A protester reacts as the U.S. Consulate in Benghazi is seen in flames. (ReuterA new State Department unit tasked with protecting high-risk U.S. diplomatic missions suffers from “significant staffing gaps,” and many in the State Department don’t even know it exists, according to a newly released report by State’s Inspector General.

Moreover, of a group of 117 authorized security protective specialists working under contract to help protect such missions, only 85 are actively on duty, due to high turnover and “uncertainty” about their program’s future, according to the Inspector General’s 32-page report.

The unit, which was created after the American diplomatic compound in Benghazi was attacked by terrorists in 2012, resulting in the deaths of the U.S. Ambassador and three others, has not yet established standard operating procedures.

The first-ever inspection of the awkwardly-named High Threats Program Directorate in the State Department’s Bureau of Diplomatic Security seems to indicate that despite a high level of enthusiasm, the U.S. diplomatic bureaucracy is still reacting ponderously to the fact that its facilities and personnel need to be safer in a turbulent and often violently anti-American world.

That fact had already been noted earlier this summer by the independent Government Accountability Office (GAO), which published its own 74-page declaration that State “has not fully developed and implemented a risk management policy for overseas facilities. Furthermore, State’s risk management activities do not operate as a continuous process or continually incorporate new information.”

And, in a reference that could surely apply to Benghazi, “ State does not use all available information when establishing threat levels at posts, such as when posts find it necessary to implement measures that exceed security standards.

To underline that threat, the GAO document also noted that from September 2012 through the end of last year, there were 53 attacks against U.S. embassy facilities and personnel, including 4 attacks that resulted in the deaths of U.S. embassy personnel.

This week, the State Department officially decried the actions of suicide bombers who killed 67 people in San’a, the capital of Yemen– where in 2012, three days after the Benghazi attacks, attackers set fire to vehicles at the U.S. embassy before being driven off by local security personnel.

One of the early tasks of the High Threats unit was to help with the evacuation of non-essential personnel from the U.S. embassy in San’a in August 2013.

The result of the rising tide of threats has been a worldwide review of U.S. diplomatic security procedures, a gusher of more than 280 recommendations for security improvements to the broad network of more than 200 U.S. missions abroad—and especially the High Threats unit, established in November 2012, and generally working to good effect, according the Inspector General’s investigation, at least as far as it can.

Its task is daunting, with 30 designated high risk missions spread across Africa, the Near East and south-central Asia, and especially Iraq and Afghanistan, where half of its current $72 million annual budget is spent.

The bigger problems apparently lie more with how the new unit is integrated—or not—into the rest of State’s sprawling system, its staffing issues, and the fact that it is still relatively unknown and its powers undefined—to the point that at the time the inspectors did their work between April and June of this year, the High Threats group was still not included in the State Department’s internal Bible, the Foreign Affairs Manual.

The disjointedness extends to its relationship with other parts of the diplomatic security bureaucracy, where hiring problems and coordination gaps are also apparently acute. As the GAO had noted earlier, taken as a whole the problems ”raise a greater concern that decision makers at State may not have complete and accurate information with which to make risk management decisions.”

To ease the problems, the Inspector General’s office issued 20 recommendations, ranging from a review of the “structure, management and manpower needs” of the new directorate to the need for a filing system to keep track of its work.

These come atop more than a dozen recommendations from the GAO that above all urged the State Department to develop a more coherent “risk management policy and procedures for ensuring the physical security of diplomatic facilities.”

Without it, the GAO warned, the result could be “a situation that could have tragic consequences for U.S. government personnel working overseas”—a euphemistic way of saying another Benghazi.