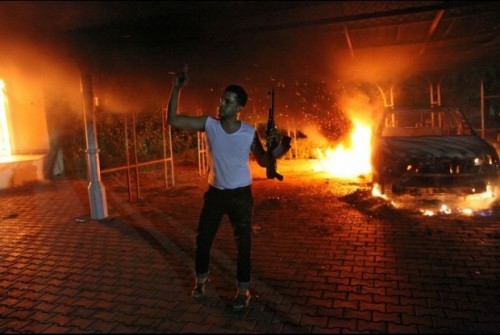 Members of the Islamist extremist militia blamed for the Benghazi terror attack had moved in next door to the U.S. Consulate months before the strike but “nothing was done” despite concerns about the dangerous neighbors, sources tell Fox News.

Sources say members of Ansar al-Sharia moved to the house just outside the east wall of the compound within three weeks of American personnel renting the facility, and later used the location to help plan and take part in the attack on the American Consulate on Sept. 11, 2012.

The neighbors prompted multiple security requests — including repeated requests up until the day of the attack — for more weapons and personnel.

“We warned D.C. about the guys who moved in next door, but nobody knew what to do and nothing was done,” a U.S. intelligence source said.

According to one intelligence source, American security personnel specifically asked for an M240 machine gun to mount on the roof at the consulate for added protection, but were turned down repeatedly.

A State Department source also confirmed to Fox News that “they asked for a belt-fed mounted machine gun, but were specifically denied by the State Department because they said it would upset the locals.”

But a senior State Department official acknowledged Tuesday that there was a request of some kind from the Benghazi post on Aug. 22. “It was being considered in Tripoli on the day of the attack. It was contained in a list of security requests, so to say that the request was rejected is inaccurate,” the official said.

The official said the department, though, has “no record” at this point of Ansar al-Sharia moving in next door.

Fox News is told that American personnel also requested sandbags to help fortify positions at the compound because “the only thing in between us and the neighbors was grass and a couple of trees and a wall.”

“The State Department knew it. Everyone on the ground knew it,” one source with direct knowledge of the attack said.

Another source said the sandbags were denied because “making shooting positions was too aesthetically unpleasing.”

The threat was so well-known that on the night of the attack, as rescuers from the nearby annex were facing heavy fire while leaving the consulate, they “made sure to make a left turn out of the consulate and not a right turn” where the Ansar al-Sharia house was located.

The revelations continue to raise questions about the State Department response and training of agents, ahead of the attack which killed U.S. Ambassador Chris Stevens, as well as Americans Sean Smith, Tyrone Woods and Glen Doherty. Others were injured.

Further, leaders of the local Libyan militia known as “‘The February 17 Martyrs Brigade” — which was tapped to provide security at the U.S. compound in Benghazi — not only didn’t respond to help save American lives, but may have directly participated in the 2012 attack on Americans. This has prompted criticism of the State Department for its original decision to contract with the powerful militia.

According to multiple sources, the department selected the militia over multiple other militia groups, private companies and even U.S. Marines to protect and secure the American consulate in Benghazi, despite the fact that those on the ground questioned the decision. As one special operator noted, “They may have been sold as the best option … but it was a terrible option. Only D.C. trusted them.”

Sources also say militia leaders may have helped orchestrate and directly participated in the attack — even though they were being paid, being fed, given automobiles and even allowed to swim in the consulate pool by the U.S. State Department. Fox News also has learned that the leader of the brigade, Fawzi Bukhatif, left Benghazi the day the attack ended on Sept. 12, even as the consulate and annex were still smoldering and Americans were standing on the Benghazi tarmac waiting to get out.

“It is truly one of the worst outsourcing decisions of all time,” said another source with direct knowledge of the attack.

This report originally published on FoxNews.com.