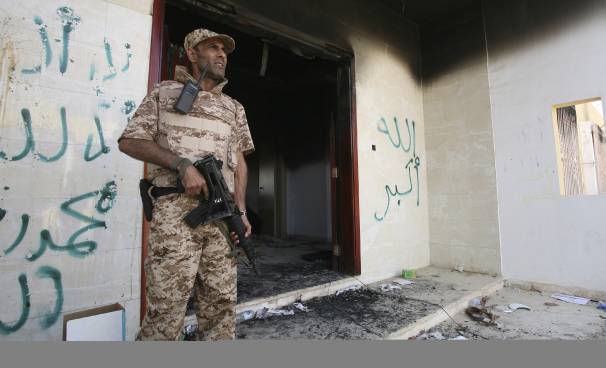 House Republicans on the Benghazi select committee aren’t waiting for Democrats to make up their mind about joining, moving quickly to exercise the panel’s expanded powers to review evidence.

While Democrats still mull whether to fill the five slots reserved for them, the seven Republicans appointed by House Speaker John Boehner, R-Ohio, are scheduled to convene later this week for what a House GOP aide described Monday as an “organizational” meeting.

The panel is investigating the Sept. 11, 2012 terrorist attack on the U.S. consulate in Libya that left Ambassador Christopher Stevens and three other Americans dead.

The committee’s focus is on hiring staff. Phil Kiko, who has a strong legal background and previously served on Capitol Hill, was hired last week as majority staff director, a position equivalent to committee chief of staff. A timeline for when the committee will begin to question witnesses and hold hearings has yet to be revealed. Committee chairman, Rep. Trey Gowdy, has also gone quiet regarding his strategy.

“I’m not going to talk about it for now. We’ll just let the work speak for itself,” the South Carolina Republican said during a brief interview.

But a review of the rules governing committee procedures points to a powerful panel that has the potential to break new ground not already covered by the five standing committees that had been investigating the attacks. The select committee’s key authorities, as established in the House-passed resolution creating the panel, include:

· Granting Gowdy the unilateral power to issue subpoenas and order witnesses to be deposed.

· Granting the select committee the same authority to review classified material as that available to the Intelligence Committee. This is considered significant, as much of the potentially relevant information was off limits to House Oversight and Government Reform, and the other committees that were investigating Benghazi prior to the creation of the select committee.

· Granting the select committee the authority to access, within 14 days, any information held by a standing House committee that is deemed relevant to the investigation — and to appropriate possession of that information.

House Minority Leader Nancy Pelosi, D-Calif., has yet to announce whether she will appoint Democrats to fill the five slots that are reserved for the minority party on the select committee. Boehner told reporters Tuesday morning that Pelosi had yet to update him with a final decision on what Democrats plan to do.