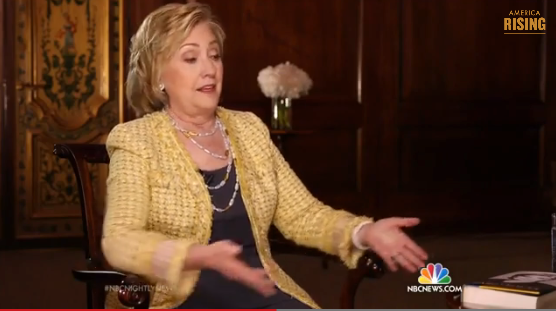 The interviews promoting Hillary Clinton’s new book are serving as a test drive for a presidential run, and she has just encountered a serious bump in the road. Despite obvious effort put into crafting careful rationalizations of her miserable record as secretary of state, she managed to blurt out a key fact in an interview with NBC’s Cynthia McFadden. Mrs. Clinton admitted that she kept detailed notes of the Benghazi crisis, a paper trail that could be subject to subpoena. Here is the transcript (via Fox News, which understands the import of the admission):

MCFADDEN: You write in great detail in the book about what was happening in Benghazi as it evolved. Did you keep a diary during your time?

CLINTON: I kept a lot of notes.

MCFADDEN: If the committee wants your notes, would you turn those over?

CLINTON: They can read it in the book. Let’s see whether this is on the level or not because that really matters to me. I don’t want to be part of something which, in any way, politicizes or demeans the sacrifice that we saw happen there.

Here is a video clip of the admission:

Should her notes be subpoenaed and she insist that only her carefully-crafted final product (which she admits was written by a “book team”) be subject to scrutiny, Mrs. Clinton will look like someone with something to hide. As a candidate for president, attempting to cover-up her own notes of her actions as secretary of state in a crisis will not look good at all.

I suspect that she was relatively relaxed with an interview from NBC News, which has a reputation as pro-Democrat. And the question asked by McFadden appealed to her vanity – asking her how she could write in such detail about the events of September 1, 2012.  In that context, she must have felt relatively safe in bragging about the notes she kept. And her response after being asked if she would make the notes available went directly to her talking points: that investigating the matter further demeans the memory of those killed.

That line won’t stand up very well if and when she seeks the presidency.