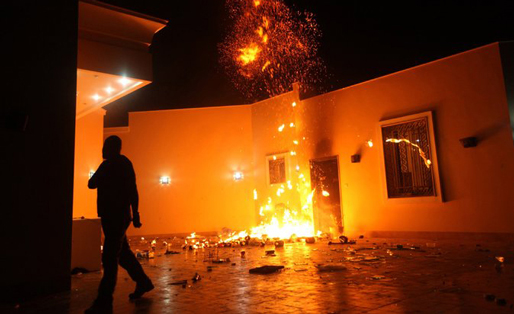 CAIRO — Five commandos guarding the C.I.A. base in Benghazi, Libya, in September 2012 say that the base chief stopped them from interceding in time to save the lives of Ambassador J. Christopher Stevens and an American technician during the attack on the diplomatic mission there.

In a new book scheduled for release next week and obtained by The New York Times, the commandos say they protested repeatedly as the base chief ordered them to wait in their vehicles, fully armed, for 20 minutes while the attack on the diplomatic mission was unfolding less than a mile away.

“If you guys do not get here, we are going to die!” a diplomatic security agent then shouted to them over the radio, the commandos say in the book, and they left the base in defiance of the chief’s continuing order to “stand down.”

The book, titled “13 Hours,” is the first public account of the night’s events by any of the American security personnel involved in the attack. The accusation that the base chief, referred to in the book only as “Bob,” held back the rescue opens a new front in a fierce political battle over who is at fault for the American deaths.

Republicans have blamed President Obama and Hillary Rodham Clinton, then the secretary of state, for the security failure.

American officials have previously acknowledged that the Central Intelligence Agency security team paused to try to enlist support from Libyan militia allies. But the book is the first detailed account of the extent of the delay, its consequences for the rescue attempt, and who made the decisions.

The commandos’ account — which fits with the publicly known facts and chronology — suggests that the base chief issued the “stand down” orders on his own authority. He hoped to enlist local Libyan militiamen, and the commandos speculate that he hoped the Libyans could carry out the rescue alone to avoid exposing the C.I.A. base.

No meaningful Libyan help ever materialized.

In an emailed statement on Thursday, a senior intelligence official said “a prudent, fast attempt was made to rally local support for the rescue effort and secure heavier weapons.” The official said “there was no second-guessing those decisions being made on the ground” and “there were no orders to anybody to stand down in providing support.”

The commandos were former members of American Special Forces teams hired by the intelligence agency as private contractors. Two of the team, both former Navy Seals, died fighting the attackers at the C.I.A. base later that night. Five others are credited as co-authors of “13 Hours,” which was written with their cooperation by Mitchell Zuckoff, a professor of journalism at Boston University. Mark Geist, Kris Paronto and John Tiegen are credited by name, and two of the authors use pseudonyms.

No American fired a weapon of any kind in defense of the mission until the C.I.A. commandos reached the compound, more than 40 minutes after the attack began, the commandos say. The Libyan guards hired to protect the mission quickly retreated. The handful of diplomatic security agents, caught by surprise and outnumbered, withdrew to separate buildings without firing a shot.

One of the commandos fired grenades to help disperse the attackers and clear an entrance to the mission. They later exchanged fire when the attackers returned for a second assault. And the commandos say that after pulling back to the C.I.A. base they fought off-and-on gun battles with fighters lurking in the shadows outside for much of the night.

Although the commandos write of several Libyans who risked their lives to help the Americans, the difficulty of discerning friend from foe is a recurring theme. They write that a supportive militia leader who appeared to be helping them approach the mission also said he was talking on the phone with the attackers, trying to negotiate.

The contractors say they raced so quickly to arm themselves when they heard the alarm that one failed to put on underwear. Another went into the battle in cargo shorts.

Then, fully armed, they found themselves waiting inside their armored vehicles, making small talk.

“Hey, we gotta go now! We’re losing the initiative!” Mr. Tiegen says he complained to the base chief, who he says replied, “No, stand down, you need to wait.”

“We are going to have the local militia handle it,” the chief added later, according to the commandos.

Correction: September 5, 2014
An earlier version of this article misstated the title of the C.I.A. official accused of preventing commandos from interceding to defend the diplomatic mission in Benghazi. The official was the agency’s base chief in Benghazi, not station chief.

——-
A version of this article appeared in print on September 5, 2014, on page A4 of the New York edition with the headline: New Book Says C.I.A. Official in Benghazi Held Up Rescue.