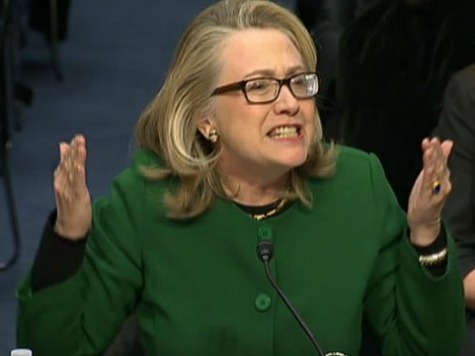 Former Secretary of State Hillary Clinton has released the chapter of her new memoir Tough Choices dealing with the terrorist attacks in Benghazi.
In an exclusive preview to Politico’s Maggie Haberman, a defensive Clinton challenged her critics but offered very little new information about where she was and what she did during the attacks.
“[T]here will never be perfect clarity on everything that happened,” she wrote, “…But that should not be confused with a lack of effort to discover the truth or to share it with the American people.”
Clinton still insisted that the anti-Islamic YouTube video did have some role in motivating the attacks, pointing to a report in the New York Times.
“There were scores of attackers that night, almost certainly with differing motives,” she wrote. “It is inaccurate to state that every single one of them was influenced by this hateful video. It is equally inaccurate to state that none of them were. Both assertions defy not only the evidence but logic as well.”
She also defended President Obama, who she insisted gave the order to do “whatever was necessary” to support the Americans under attack.
“When Americans are under fire, that is not an order the Commander in Chief has to give twice,” she wrote. “Our military does everything humanly possible to save American lives — and would do more if they could. That anyone has ever suggested otherwise is something I will never understand.”
Clinton defended Susan Rice’s appearance on Sunday talk shows, pointing out that she did “the best she or anyone could do” with the current information from the intelligence community.
She also expressed contempt for the Sunday shows, deriding her critics for not appearing on the programs herself.
“I don’t see appearing on Sunday-morning television as any more of a responsibility than appearing on late-night TV,” she writes. “Only in Washington is the definition of talking to Americans confined to 9 A.M. on Sunday mornings.”
Clinton also addressed her controversial “what difference does it make” line, explaining that her words have been misinterpreted to appear that she was trying to minimize the tragedy.
“Of course that’s not what I said,” she wrote. “Nothing could be further from the truth. And many of those trying to make hay of it know that, but don’t care.”