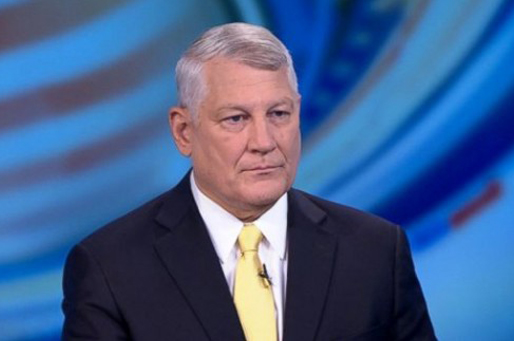 General Carter Ham, AFRICOM commander in September 2012 when al-Qa’eda jihadis attacked the U.S. mission in Benghazi, spoke with Martha Raddatz on the ABC News’ “This Week” program Sunday morning 10 August 2014. The topic was what to do about the Islamic State and its blitzkrieg advance across the Middle East, but there was a question at the end about Benghazi, too. And General Ham blew it. Badly.

Raddatz asked him about the U.S. preparation in Iraq and how different it was than in Benghazi nearly two years ago. Ham characterized the U.S. preparation in Iraq as “much more significant” than was possible in Benghazi at the time. He went on to add, “Of course there was, at least as far as I am aware, no indications of imminent attack against the U.S. diplomatic facility in Benghazi,” he said. “Current circumstance is very different in Iraq where there is an imminent threat. It’s very present, and it’s known.”

Except that’s not exactly accurate, because the reporting out of Libya and specifically out of Benghazi was not only voluminous—it was quite explicit about the deteriorating security situation there in the months, weeks and days leading up to 11 September 2012.

Let’s recall that Gen. Ham was the commander of the U.S. Africa Command (AFRICOM) at the time. That means he received all the intelligence reporting from the State Department Embassy in Tripoli, the CIA Station in Tripoli, and the CIA Base of Operations in Benghazi (the “Annex”)—on top of all the Defense Department reporting from across the North Africa region. There was so much threat reporting out of Libya after the 2011 U.S.-NATO-engineered overthrow of Libyan strongman Muammar Qaddafi that maybe Gen. Ham just got confused. Or overwhelmed…although preventing that is supposedly one of the reasons why combatant commanders like Gen. Ham have such large staffs.

In any case, as we now know, Libya descended into chaos pretty much immediately after Qaddafi was killed in October 2011. The al-Qa’eda- and Muslim Brotherhood-linked militias that the CIA, Special Forces and State Department had armed during the uprising fell to squabbling among themselves, but also began launching attack after attack against Western interests in Benghazi. The British Ambassador’s convoy was hit with an RPG attack in June 2012 and the International Red Cross decided to pull out that same month. The U.S. Special Mission Compound (SMC) in Benghazi was attacked twice, in April and June, with an IED. Even the Tunisian consulate in Benghazi was stormed by Ansar al-Sharia gunmen on 18 June 2012. On 16 August 2012, according to a cable Ambassador Christopher Stevens sent back to the State Department, a CIA officer had briefed him just the day before on the known presence and locations of some ten al-Qa’eda terror training camps in the immediate vicinity of Benghazi. As we now know, too, thanks to FOX News’ Adam Housley, Ansar al-Sharia had actually moved in next door to the SMC within weeks of that villa compound being rented by the Americans. Gen. Ham either knew or should have known about all of this—it was his job to know.

Over and over again, Ambassador Stevens, his Regional Security Officer (RSO) Eric Nordstrom, and others warned that they were increasingly at risk and pleaded for additional security resources. Instead, security methodically wasstripped away from Benghazi. The Blue Mountain security outfit (with links to both MI 6 and the CIA) hired to guard the SMC was unarmed, according to Nordstrom—on State Department orders. RSO Nordstrom warned on 21 July that the risk to U.S. officials in Libya was “High.” Gen. Ham either knew or should have known all of this, too.

If none of this was “imminent” or “specific” enough, it got worse. Cairo Embassy next door in Egypt had been monitoring Gama’at al-Islamiyya and Muslim Brotherhood plans to stage a big protest on September 11 to demand the release from U.S. federal prison of the Blind Sheikh (who’s serving a life sentence for directing the 1993 World Trade Center attack). By 10 September, however, the State Department knew that the focus in Cairo had switched over to an amateur YouTube video about the life of Muhammad. The warning went out to the White House, Intelligence Community, Department of Defense, AFRICOM, and diplomatic posts across the Muslim world that anger was building over that video and that the 9/11 anniversary would be an explosive one. Everyone went to an elevated alert status no later than the morning of 11 September 2012. Gen. Ham, along with all the other combatant commanders (who, inexplicably, had been called to the Pentagon for a meeting that 9/11, instead of being at their posts), undoubtedly knew this, too. In fact, he was the one who had to give the elevated alert order to AFRICOM.

The final—and extremely specific—warning came from al-Qa’eda leader Ayman al-Zawahiri, who issued an explicit attack order in a videotaped message posted to jihadi websites on 10 September 2012. That message called on Libyans to attack Americans in revenge for the CIA drone killing of his deputy, Abu Yahya al-Libi, some months before. There could hardly have been a more explicit warning that American interests in Libya were being targeted for attack by al-Qa’eda in conjunction with the 9/11 anniversary date. This, too, Gen. Ham either knew or should have known. It was his professional responsibility to know.

All of which leaves us with the unwelcome realization that Gen. Carter Ham has been either exceptionally forgetful, exceptionally oblivious, or less than fully truthful in his Congressional testimony and public statements about what he knew about Benghazi and when he knew it.

It falls to Rep. Trey Gowdy (R-SC) and his Select Committee on Benghazi to subpoena the General and ask him under oath a number of very specific questions. Americans will be watching.

Originally posted at Accuracy in Media.