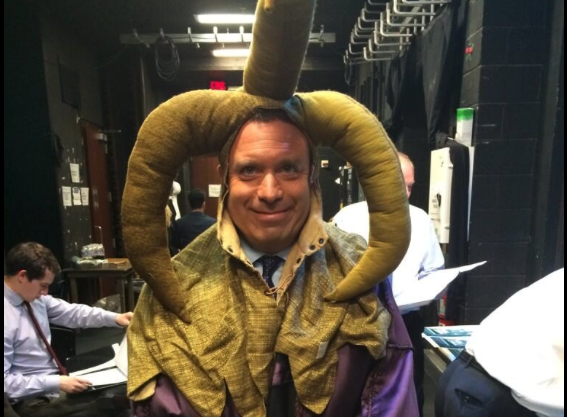 Dana Milbank is a columnist for the Washington Post who serially exaggerates or distorts what he writes about. It’s just what he does. This has been established so many times by so many people that it’s disappointing to see he is still given prominent perch in his paper and that people who made it past their sophomore year in high school take him seriously. My contribution to the cataloguing of his hackery is “Dana Milbank Is Incoherent On Marriage,” which shows how he just made stuff up when covering a panel of women at the Heritage Foundation.

Last night he published a piece covering another panel at Heritage. It’s headlined “Heritage’s ugly Benghazi panel,” and it’s all about how a peaceful Muslim woman named Saba Ahmed was horribly victimized by bigoted anti-terrorism extremists.

People are taking it very seriously. By way of example, here are two New York Times reporters pushing it out:

I was not at the panel, but because of his problems with truth-telling, I’m withholding judgment until I see the whole tape. Media Matters posted the contentious section in question, though, and it’s clear that, once again, Dana Milbank is making stuff up.

Milbank gets right to the point. He dismisses concerns about the terrorist attack in Benghazi that killed four Americans, including our ambassador there, and says that the session “deteriorated into the ugly taunting of a woman in the room who wore an Islamic head covering.”

Then Saba Ahmed, an American University law student, stood in the back of the room and asked a question in a soft voice. “We portray Islam and all Muslims as bad, but there’s 1.8 billion followers of Islam,” she told them. “We have 8 million-plus Muslim Americans in this country and I don’t see them represented here.”

In the video, here is how Frank Gaffney “taunts” the woman when she responds to the discussion of Benghazi violence by saying not all Muslims are violent:

“I’m glad to see you’re representing Muslims in this company. There isn’t anybody on this panel who thinks all Muslims are the problem. I certainly don’t.”

He then goes on to discuss how there is something that unites ISIS, the Taliban, al Qaeda, the Muslim Brotherhood and other groups engaged in Islamist violence. And he says that should be an area of concern for Americans.

When Brigitte Gabriel, an American Lebanese Christian woman, began her remarks, she said:

Not quite the scene you imagine from the Milbank report, is it.

A great example of Milbank making stuff up

You don’t need to invent quotes out of whole cloth to make stuff up. Here is how Milbank described a panelist interaction with the audience member:

“Are you an American?” Gabriel demanded of Ahmed, after accusing her of taking “the limelight” and before informing her that her “political correctness” belongs “in the garbage.”

This, my friends, is why people loathe journalists. They twist and turn and play gotcha games. Also, they make stuff up. A good editor in my past told me that he was always suspicious of reporters who rely on breaking up a quote multiple times and adding in their own words in between. It means they’re trying to force the speaker to say something. We can now call this the Milbank Rule. I mean, was everything quoted in his piece accurate? Absolutely. Were his words or description of what transpired accurate? Hell no.

Here is an actual transcript. Still totally interesting but not about questioning citizenship:

And since you’re the only Muslim representative in here, you took the limelight instead of speaking about why our government — and I assume are you an American? — You’re an American citizen — So as an American citizen you set in this room and instead of standing up and saying a question or asking something about our four Americans that died and what our government is doing to correct the problem, you stood there to make a point about peaceful moderate Muslims. I wish you brought 10 with you to question about how we can hold our government responsible. It is time we took political correctness and throw it in the garbage where it belongs.

If you listen to the panelist, you can tell that this American woman has a thick accent. She’s from Lebanon. In Milbank’s world, she’s just described as “of a group called ACT! for America” before this section is introduced. She’s not described as an immigrant who assumes the Muslim woman is also American and who is asking for the purpose of making sure her use of the first person plural is correct.

Also, her point is completely covered up by Milbank, who has a history of treating non-liberal women he covers with disdain. (Seriously, it’s a problem. It should be condemned by his colleagues.) Her point is that the four dead Americans in Benghazi are more important than politically correct speech that coddles and infantilizes citizens. It’s not a bad point. It would be a good one for Milbank and his ilk to heed. In fact, the Muslim woman concedes the point in her follow-up.

In Milbank’s fevered imagination that has only the most tangential relationship to reality, this happened:

The panel’s moderator, conservative radio host Chris Plante, grinned and joined in the assault. “Can you tell me who the head of the Muslim peace movement is?” he demanded of Ahmed. “Yeah,” audience members taunted, “yeah.” Ahmed answered quietly, as before. “I guess it’s me right now,” she said.

Friends, colleagues, countrymen who tweeted out this piece, I first have a word about this line — “Yeah,” audience members taunted, “yeah.”

You fell for that? You really fell for that? Really? Like, I’m judging you. I’m seriously judging you. “Yeah,” audience members taunted, “yeah.” If you were a high school teacher and you had a student write that in a short story composition, you would fail him, no? If you read a piece that includes a line like that and you do anything other than groan and curse Dana Milbank for bringing down the whole profession, you need to think about that.

Anyway, moving on. In the real world where real people live, Plante did ask that question. It’s a question that all reporters should press on about, just two days after al Shabaab massacred 48 human beings in Kenya and the day after the same group killed more non-Muslims. “‘My husband told them we were Christians and they shot him in the head.‘”

But while literally no one responded “yeah … yeah” in a taunting manner (Seriously, people.), you will never believe what did happen. When Ahmed said she was the leader — and she said it loudly, by the way — there was enthusiastic cheering.

If you listen to Gabriel’s discussion about “peaceful Muslims” prior to the quotes above, she makes a good point about how we ignore or downplay extremist elements at our danger. She points out numerous violent, dangerous regimes existed in concert with largely peaceful populations — but that globally, historically, politically, etc. — those peaceful groups were irrelevant in relation to the disaster caused by the extremists. She gives the example of Nazis, Chinese, Russian and Japanese — all groups that killed large numbers of people while also having populations that were peaceful apart from that.

She notes that Ahmed is the person who introduced Islam into the discussion. So, she says, “There are 1.2 billion Muslims in the world. Of course not all of them are radicals. Majority are peaceful people. Radicals are estimated to be between 15 to 25 percent according to all intelligence services around the world. That leaves 75 percent of them peaceful people. But when you look at 15 to 25 percent of world Muslim population, you’re looking at 180 million to 300 million people dedicated to the destruction of Western Civilization. That is as big of the United States. So why should we worry about radicals 15 to 25 percents? Because it’s the radicals that kill. It is the radicals who behead and massacre.”

None of these views were included in Milbank’s smear job.

Saba Ahmed is not an unknown activist in Oregon. But here is how she’s described by Milbank:

“… a woman in the room who wore an Islamic head covering … an American University law student [who] stood in the back of the room and asked a question in a soft voice.”

Here are a few other interesting things about Ahmed, whose picture in thisLinked In profile is the same as in these other descriptions.

Here is The Oregonian (h/t: Matthew Sheffield) discussing the case ofMohamed Osman Mohamud, later convicted of an attempt to use a weapon of mass destruction at the Portland Christmas Tree lighting:

A family friend, Lewis & Clark Law School student Saba Ahmed, said she knew many facts in the case not yet made public, and she blasted the FBI and U.S. Department of Justice. She blamed the government for inciting violence, pointing out that the mosque that Mohamed is said to have attended in Corvallis was torched on Saturday in possible retaliation. “This is very irresponsible behavior because now the Muslim community is the one suffering the consequences,” she said. “And we will take very serious action — politically and legally — against the government for this.”

Here is a link about her run for Congress in 2011, her party switch, herappearance at Occupy Portland, her disappearance and recovery after checking into a mental health facility, and a story about being trapped in the home of a man with multiple wives and a family dispute about honor.

I’m not arguing that all of this public information should be included in Milbank’s account — but maybe that friend of a convicted terrorist thing could have been included.

Which reminds me how right after the Sept. 11 terrorist attacks, theWashington Post was trying to emphasize interfaith understanding. To help them, they had Anwar al-Awlaki write up a discussion of Ramadan and they had a videographer chronicle a day in his life. That’s always been a good reminder for me that journalists are really good at emphasizing tolerance and acceptance of Islam and Muslims but not so great at sussing out Islamist terrorist masterminds later killed by President Obama in a drone strike.

Anyway, can we please stop falling for Milbank’s hackery?