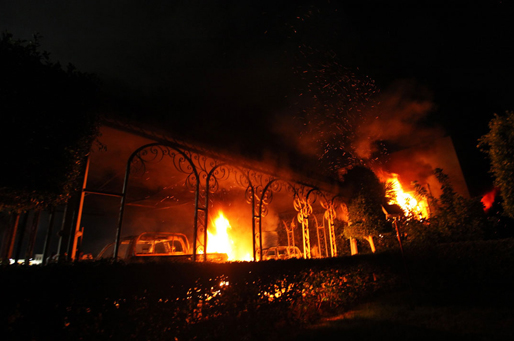 A New York Times story published this week said the inaction following the Benghazi attack weighed heavily on President Barack Obama’s mind when considering whether to strike the ruthless terror group, who rebranded itself as the Islamic State of Iraq and the Levant, or ISIS, in keeping with Osama bin Laden’s call for a “Caliphate.” The terrorists have been pillaging their way through Syria, moving to Iraq, and taking major cities as well as important resources like Mosul Dam.

The Mosul Dam is significant because it poses twin problems for Iraqis. One, it is rated by the U.S. Army Corps of Engineers as the most dangerous dam in the world that is capable of flooding and killing 1.5 million people. Secondly, ISIS can use the valuable water resources as leverage to exact terror, generate revenue, or both.

While few could dispute the President’s apprehension during and after Benghazi, theTimes characterization of the Benghazi attack as a terrorist attack similar to IS’ assault on Iraq is a bit of an historical rewrite.

First, there is no doubt that terrorists were involved in the terror attack on U.S. diplomatic facilities in Benghazi, Libya. But it was a retaliation attack against the U.S. for “its” role in a 2012 drone strike that killed al-Qaeda’s number two and the highest-ranking Libyan, Abu Yahya al Libi.

“Local (Pakistani) tribesmen and American officials said that a CIA-controlled drone fired on a compound early Monday morning (June 4, 2012). Word spread quickly among local tribesmen that Mr. (Abu Yahya al) Libi had been killed or wounded, and American intelligence officials using powerful satellite and other surveillance equipment listened and watched carefully for a sign of his fate.” (From a story written by this reporter Feb. 14, 2013) A fateful drone strike in June would change everything inside Libya and put the Ambassador in a target crosshair.

As fate would have it, this event would become the precursor for Libyan al-Qaeda retaliation against the American Central Intelligence Agency (CIA).

Intelligence on the ground in Benghazi points to a well-planned eight-hour attack on the Special Mission (SMC) and CIA Annex. The well-coordinated assaults on the Benghazi SMC as well as a nearby safe house (the CIA Annex) are believed to be in retaliation for a drone strike ordered by President Obama that killed Abu Yahya al-Libi.

The overlooked and “palpable” motive for the killing of Chris Stevens, Sean Smith, Tyrone Woods and Glen Doherty is the President’s Targeted Kill List (TKL). The evidence for the “quid pro quo” killing of Ambassador Stevens by al-Qaeda is compelling. Details released in Congressional reports and testimony on Capitol Hill hearings suggest Ambassador Stevens was lured to Benghazi by the Turkish Consul General, Ali Sait Akin, who wanted to meet Stevens on 9-11 in out-of-the-way Benghazi instead of the more-secure U.S. Embassy in Tripoli, where the Ambassador conducted the bulk of his diplomatic business.

Second, the myth that CIA (liaised) weapons trafficking and training of rebel fighters must be dispelled. Al-Qaeda never complained about “selling” their weapons to the U.S. intelligence community in Libya because the same weapons were being transported for use on the Syria battlefields.

(Taken from a story written by this reporter December 10, 2012) Combine Obama’s weapon buyback program in Libya with the delivery to Turkey and Syria of those same weapons to known Al Qaeda units and there’s a recipe for catastrophe.

Shortly after the October 2011 death of Qaddafi, Secretary of State Hillary Clinton announced in Tripoli that the U.S. was committing $40 million to help Libya “secure and recover its weapons stockpiles.” Department of State Assistant Secretary Andrew Shapiro confirms the State Department had a weapons buy-back program in Libya that was also supported by the UK who gave $1.5 million, the Netherlands gave $1.2 million, Germany gave about $1 million and our neighbor to the north, Canada gave $1.6 million to purchase the deadly arsenal that went missing after the fall of Qaddafi.

The State Department was specifically looking to acquire the 20,000 MANPADS (they are commonly known as man-portable air shoulder-fire missiles) that went missing once Qaddafi was killed.

State Department Assistant Secretary, for Political-Military affairs, Andrew Shapiro said, they did not know how many MANPADs remained missing, but admitted it was a significant number. “Many militia groups remain reluctant to relinquish them,” Shapiro said. He did say that the U.S. has recovered about 5,000 MANPADs earlier this year.

(This is further highlighted in another story written on April 28, 2014) In his story: “The red line and the rat line,” Hersh says the Obama administration reached a special agreement with the Turkish government that allowed the Central Intelligence Agency (CIA) to skirt a presidential finding to move illicit weapons from Benghazi. He said by classifying the “special” partnership as a “liaison operation” the Obama regime essentially bought and sent weapons to al-Qaeda in Syria.

Third: The training of Syrian rebels was highlighted in an article in The New York Times. According to a June 2012 story, “A small number of C.I.A. officers are operating secretly in southern Turkey, helping allies decide which Syrian opposition fighters across the border will receive arms to fight the Syrian government, according to American officials and Arab intelligence officers. The weapons, including automatic rifles, rocket-propelled grenades, ammunition and some antitank weapons, are being funneled mostly across the Turkish border by way of a shadowy network of intermediaries including Syria’s Muslim Brotherhood and paid for by Turkey, Saudi Arabia and Qatar, the officials said. “C.I.A. officers are there and they are trying to make new sources and recruit people,” said an Arab intelligence official that was briefed regularly by American counterparts.

Supporting the Hersh account on Benghazi is Gen. Mohammed Farid el-Tohamy, the director of Egypt’s General Intelligence Service. Earlier this year former Defense Intelligence Agency agent LTC Shaffer (U.S. Army) travelled to Egypt and met with el-Tohamy who said there had been no change with his relationship with his U.S. counterparts at the CIA. In fact, he told The Washington Post, “Cooperation between friendly services is in a completely different channel than the political channel,” el-Tohamy said. “I’m in constant contact with [Director] John Brennan at the CIA and the local station chief, more than with any other service worldwide.” Shaffer also said the Egyptians knew all about the weapon trafficking program in Benghazi. “It was an open secret.”

Fourth: (Taken from a story written by this reporter June 24, 2014) A senior intelligence official disclosed to this reporter that the ISIS (Islamic State of Iraq and Syria) includes terrorists, and based on prior reports, the jihadi group has been equipped and financed by the U.S., Kingdom of Saudi Arabia (KSA), and the Emirate of Qatar purportedly for war against Syria’s President Bashar al-Assad.

However, something went wrong with the President’s plan over the last few weeks as ISIS launched its sustained attack against Iraq from rebel-controlled bases in Syria and government supported bases in Turkey.

To confound matters even more, both KSA and Qatar warned the U.S. against any intervention against ISIS, which has allowed ISIS to move freely across the great expanses of desert on the Damascus – Baghdad Highway to attack and return to Syria with the spoils of war – U.S. made Humvees and tanks. Over the weekend House Intelligence Committee Chair Mike Rogers complained that inaction by Obama to deny ISIS the unfettered use of the Damascus – Baghdad Highway to launch attacks against Iraq and to return to its bases in Syria is a ratification of U.S. support for the Sunni dominated terrorists seeking to remove Shiite President Assad of Syria and Shiite President Maliki of Iraq. Is it just coincidence that ISIS is also heavily supported by KSA and Qatar?

The action by ISIS appears to be an escalation of the Sunni-Shiite battle for dominance of the Islamic world and seems headed towards a broader war to include Jordan, Turkey, Kurdistan (semi-autonomous region of Iraq), Iran and eventually Israel.

And fifth: The terror group now known as the Islamic State has declared war on the United States of America. This provides the justification for President Obama to launch air strikes to provide national security for Americans, which happens to be the most important duty as the Commander in Chief.

A perfect example is the leader of the Islamic State of Iraq and Syria (ISIS), Abu Bakr al-Baghdadi, a former Iraq al-Qaeda leader who once told his capturers (US military in Iraq) “he would see them in New York City.” How al-Baghdadi was going to attack NYC remains unreported. Nevertheless, the obscure terrorist group rose to power by swiftly and decisively toppling a U.S. trained Iraqi military.

Enter Syria. Not only has recently reelected President Bashar al-Assad had to fight a brutal civil war, but also his once-secular country is a magnet for thousands of foreign terrorists vying for a caliphate. In the midst of civil war, the Assad regime repeatedly targeted ISIS and this week successfully launched air strikes against ISIS near the Iraq/Syria border town of al-Qaim.

The Iraqi government was grateful. “There was no coordination involved, but we welcome this action. We welcome any Syrian strike against ISIS because this group targets both Iraq and Syria … But we didn’t make any request from Syria. They carry out their strikes and we carry out ours. The final winners are our two countries,” President Maliki told the BBC. It must also be noted that both governments are within the political sphere-of-influence of Iran.

Meanwhile, Joshua Earnest, White House spokesman confirmed the Syrian action and said the White House had “no reason to dispute” the successful airstrike.

And finally six: Destroying this terror group would have been as easy as the turkey shoot in Persian Gulf War 1, when U.S. planes effectively halted any enemy convoy movement. During the precision planned war, the U.S. destroyed 1,500 vehicles and countless Saddam Hussein soldiers on the Highway of Death, the Baghdad to Kuwait Highway, which became a graveyard when the U.S. used its airpower to stop the invasion and effectively neuter Iraq’s dictator.

So, the characterization of a similarity between Benghazi and Islamic State is unsupported, but the reticence of the President to act decisively is consistent. However, as previously reported (Prepping for Iran War) the complicated relationships between the parties may be the reason for the President’s conduct. On the one hand he is working with Iran to support the Kurds and Yazidis against IS, but on the other hand, he is working with Saudi, Qatar, the Emirates, Kuwait, and probably Israel in a solid front against Iranian nuclear ambitions. Perhaps George Washington’s warning against entangling alliances may have been prophetic …and those are the facts.