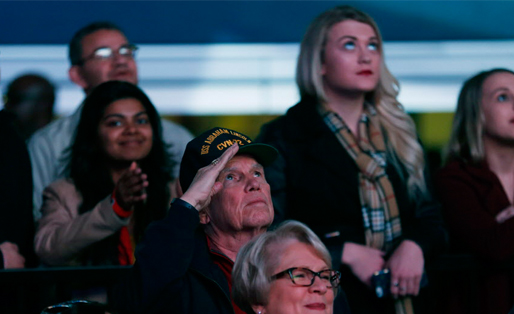 About 30,000 free tickets were distributed for Tuesday night’s world premiere of 13 Hours: The Secret Soldiers of Benghazi on AT&T Stadium’s giant high-definition video board.

Thirteen Hours tells the story of six elite veterans who were assigned to protect the CIA in Libya and fought back an assault on a U.S diplomatic compound. The movie opens in theaters Thursday.

Ambassador J. Christopher Stevens and three other Americans died in the September 2012 attack, which led to ongoing strife between Democrats and the GOP.

But K.C. Baney said it wasn’t politics that brought him to AT&T Stadium. He was taking a break from helping with tornado recovery efforts in Glenn Heights.

He and other members of the disaster relief group Team Rubicon who attended the premiere served in the military themselves.

Movies such as 13 Hours can help veterans reintegrate into society, he said.

“Every one of these guys and gals has a story, and sometimes it’s a little hard to draw the story out of them,” said Baney of upstate New York. “And events like this help to kind of facilitate that, like, OK you’re not alone; we’ve all been down this road.”

Director Michael Bay and several cast members, including John Krasinski and Pablo Schreiber, attended the premiere with several of the operatives the film is based on.

One of those men, Mark Geist, has said he hopes the movie helps redirect the debate over Benghazi.

“The political side of it needs to focus on the truth and not focus on the spin,” he told The New York Times.

Some people at AT&T Stadium, though, had chosen sides in the partisan battle.

“I feel like it’s a movie that’s going to show that Hillary Clinton is a liar and a cheat because she kept saying it was a video, it wasn’t a protest, that caused this action in Benghazi,” said Edwards, who flew from Fayetteville, Ga., to see the movie. “I hope it exposes all the truth and destroys the lies that we’re getting out of the White House.”