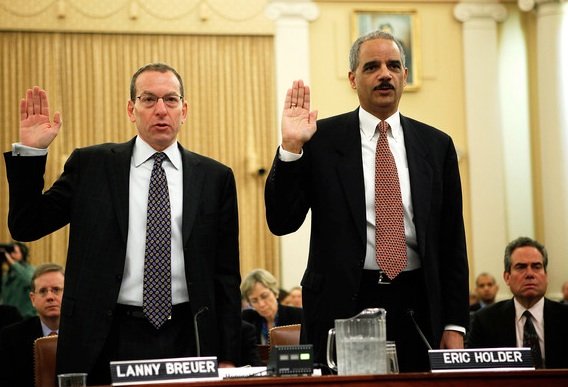 The producer of the anti-Muhammad video the Obama administration blamed for the Benghazi attacks is actually a confirmed agent of Eric Holder’s Justice Department.

The damning trail of evidence begins when a fictitious narrative was concocted by the FBI to lure the courts that Nakoula (the Filmmaker, aka Yousef) was supposed to help the FBI catch Eiad Salameh, his partner in crimes for many years. Yet, the deal was never fulfilled and Eiad was let go by the Feds in 2011 as Shoebat.com revealed in a firsthand account never before reported, including a recorded conversation between Nakoula and Shoebat.com in which the filmmaker defended Eiad, the very man he was supposed to help the FEDS catch!

Bolstering the case (aside from the Feds letting two criminals go) is how the filmmaker became an agent of Eric Holder. After Nakoula’s arrest, there was a very curious development at the U.S. Attorney’s Office for the Central District of California, which was handling his case through an Assistant U.S. Attorney who suddenly was pulled off the case and replaced by a full bird –  Chief of the office’s Criminal Division, Robert Dugdale.

Nakoula got high-profile attention.
In an article that appeared in the Washington Times, Kerry Picket wrote:

What is curious, though, is the fact that the original Asst. U.S. Atty. Jennifer Williams, who helped prosecute Mr. Yousef’s [Nakoula] bank fraud conviction, is not the attorney Mr. Yousef’s lawyers would eventually deal with. Mr. Yousef’s probation violation case, for no explained reason, was kicked up to Chief Criminal Division prosecutor Asst. U.S. Atty. Robert Dugdale. Dugdale is second in the chain of command below U.S. Atty. Andre Birotte of the Central District of California.

Picket was suspicious, she attempted to get answers from the office’s spokesman, Thom Mrozek:

When I pointed out that AUSA Dugdale was not part of the team of attorneys who did prosecute Yousef’s case and asked why the case was kicked up the chain to AUSA Dugdale, Mr. Mrozek responded, “I don’t comment on staffing decisions.”

The U.S. Attorney over Dugdale – Andre Birotte, Jr. became the local caretaker of a very high profile and high stakes case the Obama administration wanted to control very closely and later was nominated by Obama to be U.S. District Judge for California’s Central District.

Eiad Salameh, Nakoula’s partner in crimes – also beholden to the administration – obtained special favors from doing the Justice Department’s bidding. According to a report by The Smoking Gun just days after the Benghazi attacks, charges against Eiad (who has a proven rap sheet ) were dropped in the same year that Canadian authorities picked him up:

It is unclear whether Salameh, whose whereabouts are unknown, has been charged in connection with the bank fraud. Salameh was named in a 2006 federal criminal complaint charging him with felony fraud. That complaint–filed under one of Salameh’s many aliases–was dismissed last year by federal prosecutors. A court docket shows that no filings were made after the initial complaint, likely indicating that Salameh was never apprehended.

But the last sentence is incorrect; Salameh was apprehended.

Jeffrey Mason of the Canadian Peel Police picked Salameh up in January of 2011!

At that time, he should have been wanted in connection with both the 2006 and 2009 cases, assuming he was involved in the Nakoula bank fraud case. Yet, the 2006 case was dropped in either the same month Eiad was arrested or in the months that followed.

Shoebat.com has learned from one retired FBI agent that this doesn’t just happen unless Eiad was providing the Feds with something in return for such treatment.

As Shoebat.com has reported, a timeline provides further evidence that the Obama Administration was in cahoots with these figures in the summer of 2011, during the July-August time frame.

1.) Secretary of State Hillary Clinton co-chaired a meeting in Istanbul, Turkey with the head of the Organization of Islamic Cooperation (OIC). It was to be the first of several meetings that would become known as “The Istanbul Process”. One of the objectives of the OIC has been and remains, to pressure non-Muslim countries to censor speech critical of Islam.

2.) Nakoula began casting for his video.

3.) Eiad Salameh was put on a plane back to Palestine by the Canadians after Eric Holder’s FBI refused to have him extradited and charged.

Eiad was clearly on the hook with the U.S. Justice Department if his 2006 case was dismissed.

FBI’s Benghazi Investigation
When UN Ambassador Susan Rice blamed Nakoula’s video for the Benghazi attacks during her five Sunday talk show appearances on September 16, 2012, it served to anger the president of Libya, who shortly before Rice, had identified the attack as an act of terrorism. Last year, State Department whistle blower Gregory Hicks, the Deputy Chief of Mission in Libya at the time of the attacks, testified about this and said Rice’s comments prevented the FBI from getting to the site of the attacks for weeks.

Here is Hicks giving his testimony while being questioned by the current chairman of the House Select Committee on Benghazi, Rep. Trey Gowdy (R-SC):

Based on the FBI’s relationship with Nakoula and Eiad, the longer it took to get to the scene of the Benghazi attacks, the more compromised that scene would become. A compromised crime scene would have served to aid the perpetuation of the video narrative.

Hicks also testified that he was not interviewed by the FBI:

Silencing Skeptics
Is it unusual for the U.S. Government to empower informants to engage in a massive scheme and criminal enterprise for the purpose of creating a political climate to help push an agenda? Hardly. In much the same way that the Obama State Department championed the “Istanbul Process” as a vehicle to assault the first amendment, a gunwalking operation was used to assault the second amendment.

In Operation Fast and Furious, multiple federal agencies worked together as part of an Organized Crime Drug Enforcement Task Force (OCDETF). The stated purpose of the operation was to track guns that were being trafficked into Mexico, arrest the bad guys, and confiscate the guns. In reality, as has been clearly demonstrated, the actual purpose was to allow the guns to “walk” into Mexico and make their way into the hands of drug cartels after the ATF – an arm of the Justice Department – mandated U.S. gun store owners sell the guns to bad guys.

In 2011, ATF Special Agent in Charge (SAC) William Newell was grilled by House Oversight Committee member, Rep. Patrick Meehan (R-PA) about the operation being an OCDETF case. Newell trapped himself in one of the most compelling moments of Fast and Furious hearings, beginning at the 3:00 mark:

The guns would be picked up at crime scenes and American gun store owners would be blamed in a blood libel (sound familiar?). The cover of that operation was blown after the death of Border Patrol Agent Brian Terry. An ATF whistle blower named John Dodson came forward and the scandal was exposed.

If blood libel and the collateral damage of innocent human lives in the interest of pushing an agenda like like gun control was used to launch an assault on the second amendment, why would it be beyond plausibility to envision the same administration launching an assault on the first amendment using to create the climate for speech control?

Ironically – and perhaps not so coincidentally – the man in charge of the Criminal Division involved in both Fast and Furious and the post-Benghazi prosecution of Nakoula was Lanny Breuer.

Obama’s Marxist Roots
From Obama’s Marxist Roots we can learn about the term agitprop which describes a tactic that is of Russian origin. It has three definitions one of which is “agitation and propaganda”, promoted  by “agitpropists”, people who are trained or take part in such activities. Fast and Furious was clearly agitprop and it was also an OCDETF case, which meant it spread across an entire administration. Such was the anti-Muhammad video which also involved multiple administration agencies and departments. Barack Obama’s Communist Party USA (CPUSA) mentor was Frank Marshall Davis, a man followed closely by a completely different FBI for 19 years. Davis wasn’t just a CPUSA member; he was a Communist writer and propagandist; he was an… “agitpropist”.

In conclusion, cutting a deal with one criminal to help them catch another it didn’t want brings legitimate questions about how Nakoula’s case was handled by Holder’s Criminal Division, where the possible monies obtained for the film, led at the time nationally by a figure whose claim to infamy is that he wound up as a central figure in the Operation Fast and Furious gunwalking scandal – Assistant Attorney General Lanny Breuer. Along with Holder, Breuer, Dugdale, Birotte should all be deposed by the House Select Committee on Benghazi.

So should Nakoula and Eiad.

The question should be: Why did the law enforcement bureau Holder led refuse to pick up Eiad when offered on a silver platter by Canadian authorities in 2011. What was the source of the monies spent on the movie? Why was Nakoula given a lesser prison sentence to help the FBI arrest someone it didn’t want, thereby making the plea deal about something else?

In the days after the Benghazi attacks, Nakoula was arrested for violating the terms of his probation. The optics, coupled with the Obama administration’s attempts to blame the video for the deaths, clearly communicated that he was being punished for producing a “crude and disgusting video” that was critical of Islam. Unfortunately, the outrage Nakoula’s arrest generated in conservative circles actually played to the Obama administration’s advantage creating a distraction from the devastating truth.

Based on this explosive development, enough probable cause exists to investigate whether or not Eiad was involved in financing Nakoula’s video production. In this ABC News story filed just two days after the Benghazi attacks, it was revealed that the cost of the video was between $50,000 – $60,000 financed by his family in Egypt.

Just two weeks after Benghazi, Shoebat.com published a report about the claim by Nakoula that his “family” provided him with the funds to produce the video. As we wrote then, this “family” has not been located:

…if an Egyptian by the name of Nakoula Bacile Nakoula is blamed for angering over a billion Muslims, it would not be that difficult to find the entire family in Egypt, to include brothers, cousins, aunts, siblings wife, wives, ex-wives, mistresses, and pets, et. al., especially since the riots that spanned across 30 nations were sparked in Egypt.

In the Middle East, you are known by your clan. Yet, Egypt cannot produce neither this man’s family or his background?

Was Eiad the source of the $50,000 – $60,000? The Feds clearly couldn’t have their fingerprints on the money but two informants who were beholden to the Justice Department could. Is this why he wasn’t taken into custody when the Canadians offered him up?

Providing even further evidence that Nakoula’s video was about agitprop and blood libel are his initial claims about the source of his funding. According to the ABC News report above, Nakoula attempted to say the video cost $5 Million and was funded by a consortium of wealthy Jewish friends. This was clearly lie.

In a Shoebat.com exclusive, we learned that Nakoula recently told one of the actresses in his video – Cindy Lee Garcia – that he is a Muslim after being confronted by Garcia. This claim is bolstered by the mere partnership of Nakoula and Eiad.

Eiad Salameh is a Muslim fundamentalist who hates Coptic Christians. If Nakoula was a Copt, why would Salameh partner with him? The answer is that Nakoula is a Muslim who used agitprop and blood libel as an agent of the Obama administration and its Justice Department.